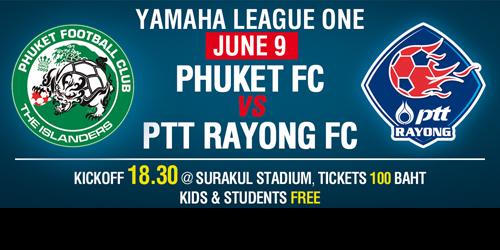 PHUKET: Phuket FC’s inconsistent start to the season continued after they beat their Phang Nga Bay rivals Krabi 2-0 on May 29 in front of a raucous crowd: The team then traveled to Saraburi and lost 1-0 after Mario Neto scored a late winner.

The Islanders are in fifth place, three points behind Bangkok FC in the last automatic promotion spot in third, but they are already 12 points behind top of the table Air Force United. Trat and Nakhon Ratchasima are one and two points behind Phuket, respectively.

This weekend’s home match against second place PTT Rayong, who knocked Phuket out of the Toyota League Cup 1-0 earlier this season, could leave Phuket six points adrift of third place if they lose and other results go against them.

The Islanders were touted as promotion hopefuls at the start of the season but they are struggling under the weight of expectation.

The team has a strong mix of foreign and Thai players but they rely too heavily on players like Dudu and Geoffrey Doumeng. Frenchman Doumeng is the heartbeat of the team and when he is missing the team has no real spark.

Dudu returned to the starting 11 against Saraburi after missing three games with a thigh injury, but Doumeng watched on from the bench.

The Islanders have released their high profile pre season defensive signing, Cameroonian Moudorou Moise, who was signed from Thai Premier League side Thai Port. The commanding center back looked off the pace during pre season and his lumbering displays in a couple of Yamaha League One matches caused concern. He quickly lost his place to Japanese defender Sato who has forged an instant understanding with Nenenbi. The tall Japanese defender looks assured on the ball and can just as comfortably play as a defensive midfielder.

In the two YL1 matches Phuket played against PTT last season they lost 1-0 at home and were re soundly beaten 6-0 away.

The match kicks off at 6:30pm on Sunday at Surakul Stadium (click here for map).