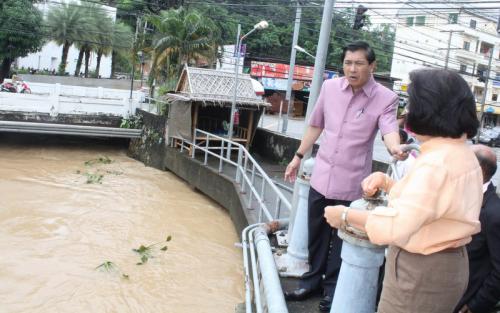 PHUKET: An island-wide flood and landslide warning has been issued as heavy rains continue to soak Phuket.

The warning was issued to all local authorities across the island, San Jantharawong, chief of the Phuket office of the Department of Disaster Prevention and Mitigation (DDPM-Phuket), confirmed to the Phuket Gazette this morning.

“There has been heavy rain every day for days now. As the soil on hillsides soaks up more rain, the slopes might not be able to support the extra weight, leading to landslides,” he explained.

Mr San also urged people to keep up to date with news and weather alerts.

“News and weather reports can provide critical warnings in case any urgent situations arise,” he said.

He also inspected pump stations and waterways through the town to ensure the canals were cleared of undergrowth and debris, so water could flow swiftly away from flood-prone areas.

“We were informed of a landslide near the Chao Pho Seua Shrine [Tiger Temple] on Patong Hill [map here],” Governor Maitri said.

“Officers were ordered to clear the dangerous site, and we ordered Kathu District Chief Veera Kerdsirimongkol to beware landslides at any new construction sites in the area,” he added.

“We issued a warning for all fishing and tour boats to stop operating at this time, and we urge all motorists to exercise caution when driving,” Gov Maitri said.

The Thai Meteorological Department this morning issued its 18th consecutive heavy rain warning for Phuket and the Andaman region since last Saturday.

All ships should navigate with caution and small boats should keep ashore, the warning maintained.

Widely scattered thundershowers over 70 to 90 per cent of the island are forecast to continue until Sunday.

The same foul weather was forecast to cover the Andaman coast provinces of Ranong, Phang Nga, Krabi, Trang and Satun.