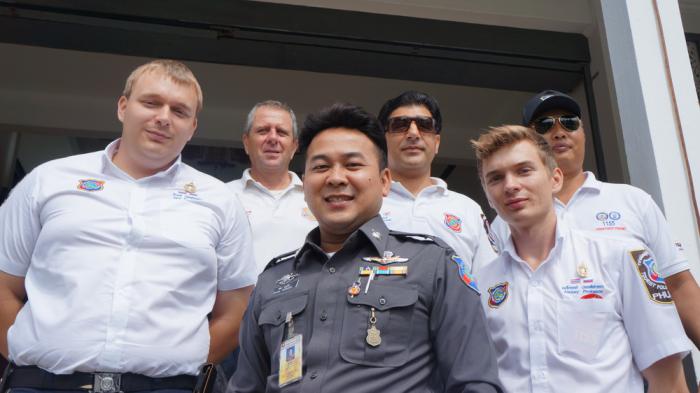 PHUKET: The ousting of Patong Police Superintendent Chiraphat Pochanaphan on Monday has prompted expat police volunteers in Phuket to go on strike.

Expat police volunteers will no longer assist police or carry out their highly-praised night patrols of Patong until a clear structure is established, explained Wal Brown, long-term Phuket expat and head co-ordinator of the Royal Thai Police Region 8 volunteers on the island.

“We will meet with top-ranking officers at Patong Police Station this afternoon to discuss how the volunteers can continue working with police in assisting foreigners and tourists in need,” he confirmed to the Phuket Gazette this morning.

Phuket Provincial Police Commander Ong-art Phiwruangnont removed Col Chiraphat from his post to acquiesce to the demands of about 200 tuk-tuk drivers who blockaded the Patong beach road and Rat-U-Thit 200 Pi Road on Monday night (story here).

The tuk-tuk drivers were protesting alleged unfair treatment by Patong Police, who they said allowed legally registered taxis to park illegally in public parking spaces, but did not allow Patong tuk-tuk drivers to do the same.

The strike comes as many expat police volunteers have resigned from the Tourist Police in Patong, choosing to join their counterparts who assist regular Royal Thai Police officers.

“We no longer have Claude de Crissey as our chief, so we have chosen to leave the Tourist Police and instead help the regular police.”

“But with Col Chiraphat now gone, we need to sort out who we work with and how we can continue working with law enforcement.”

Mr de Crissey was unavailable for comment this morning as he was busy attending to affairs in his role as French honorary consul for Phuket.

“We have 35 expat volunteers across the island, and 10 of them are still operating in Patong,” he said.

“The Tourist Police Hotline 1155 is also still functioning as usual, with officers ready to answer calls 24 hours a day.”