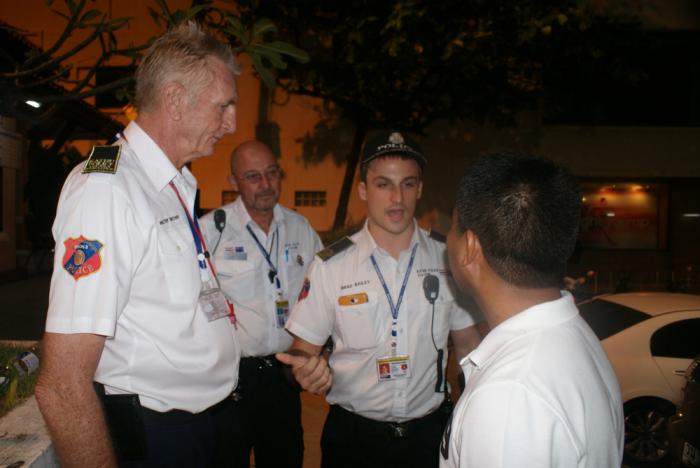 PHUKET: At least five long-term Phuket expats who have spent years assisting police as volunteers in Patong have resigned over allegations that police officers have extorted money from tourists.

The Region 8 International Volunteers who work out of Kathu Police Station – the formal name for the police station in Patong – met today to discuss their concerns about working with tourists and the police.

“The international volunteers had a problem where a tourist was ordered to pay 20,000 baht more than the original compensation for damage to a room because he asked for assistance from a volunteer,” explained Wal Brown, head co-ordinator of the Royal Thai Police Region 8 volunteers on the island.

“The tourist was also threatened with a greater fine and jail if he were to talk with the volunteer again… This is one of a number of issues where the international volunteers have been used against the tourist.”

“The remaining volunteers hope to meet at Kathu Police Station Thursday next week with senior officials to discuss their problems,” Mr Brown said.

Some of the police volunteers have been working in Phuket, and some specifically in Patong, for more than eight years.

“They have a lot of experience dealing with situations on the street. These volunteers have been working more closely with the Royal Thai Police over the past four years and have worked hard to break the barrier that used to exist between foreigners and police,” Mr Brown said.

“Most tourists who meet the police on the streets today have a rewarding experience because our volunteers have been interacting with the police and talking to them about the cultural differences, and the police have more confidence with their English skills and are less threatened when a tourist asks them for assistance.”

“The international volunteers have had a lot of input into the Patong Safety Zone, which is a credit to the police for the initiative,” he added.

The news clarifies a report earlier today stating that the expat volunteers had gone on strike following the instant transfer of Patong Police Superintendent Chiraphat Pochanaphan on Monday (story here).

It also comes just one month after Phuket Tourist Police chief Urumporn Koondejsumrit branded allegations that three of his officers extorted 20,000 baht from an Italian man in Patong as a “big misunderstanding” (story here).