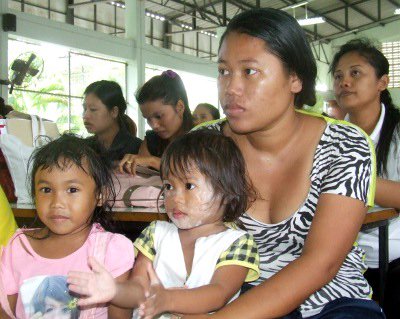 PHUKET: The Phuket daycare teacher allegedly caught on video beating her students has been charged with child abuse, with the possibility of more charges to come.

Meanwhile, Wichit Municipality has taken over the Wat Thepnimit daycare center, where parents and other teachers say the beatings took place regularly.

The scandal unfolded on July 24 when teachers from the daycare center showed parents a video clip of their colleague, 47-year-old Pranee “Kru Kiew” Jantalert, beating their children.

The video was also posted on You Tube.

Angry parents gathered at the temple on Friday to demand explanations as to why this abuse took place, and, oddly, why all of the other teachers had been sacked in response to the incident.

After a meeting yesterday between the temple abbot, temple committee members, teachers and parents, it was agreed that responsibility for the school would be handed to Wichit Municipality and that the four teachers who had been fired would be rehired.

Pranee, however, has not been asked to come back to the school.

“Right now we are questioning parents whose children were beaten by Kru Kiew. Right now there are three families, but we expect more to come forward,” Phuket City Police Officer Wirat Tenthong said.

“We’ve already charged her with child abuse and we are looking into the Child Protection Act to see whether any other charges may be applicable,” Capt Wirat said.

“Once we’ve decided on additional charges, we will inform her of them and ask her to come in for questioning this week. If she doesn’t come, we will issue an arrest warrant,” he added.

Nilobon “Kru Por” Chianchankarn, the teacher who recorded the video, said, “I haven’t seen her [Pranee] since all this happened, but I know from people that she’s still living in a Phuket villa where she is running a nursery.

“Some parents told me that when they heard about this story, they rushed to her house to pick up their children.”

Sompis Pettongnang, mother of one of the children hit in the video, said that the case is with the police and now the concern is what to do with their children.

“Most parents who brought their children to this daycare live nearby, so we would like to see it continue operating,” she said.

Although it looks certain that the center will reopen after a seven-day closure to prepare a budget, it is not clear who the teachers will be.

“The four teachers who received termination letters signed by the abbot have been offered their jobs back. However, three of us are considering leaving because the new contract will be for much less salary,” Ms Nilobon said.

“Before, we got 8,200 baht a month and some other subsidies such as Social Security,” she added.

Only one teacher has more than three years experience, which qualifies her for a higher salary.

“If we leave, the municipality will find new teachers – I’ve been offered a different job,” Ms Nilobon said.

Phuket in the mood for seafood