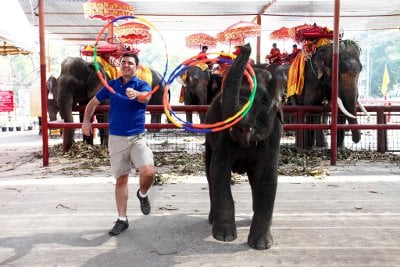 PHUKET: Internet sensation Matthew “Dancing Matt” Harding was in Phuket yesterday to record his latest video and promote the Tourism Authority of Thailand’s most recent promotional campaign: “Go Thailand: All That Is Missing Is You”.

Perhaps the world’s most well-known globetrotter, Matt was in Phuket for just one day. He met with the media at Mission Hills Phuket Golf Club prior to a shoot in the Kata-Karon area.

“This is my first time in Phuket, but my third or fourth time in Thailand. Phuket is beautiful. I spent some time watching the sun rise this morning. Today was a beautiful day,” he said.

Dancing Matt certainly gets around. The video game designer and internet celebrity has done his trademark jig at hundreds of locations on six continents, and he shows no sign of slowing down.

After leaving Phuket, Matt plans on visiting Bali, Manila, Hong Kong, the Maldives and Dubai before heading home to the United States.

Matt made stops to do his dance in Ayutthaya and Bangkok before he arrived in Phuket.

Matt is often cited as an example of an ordinary person transformed into a global celebrity via internet-based social networks. He had started out simply by recording videos and posting them on YouTube for his family to watch, but many people fell in love with his simple but happy style of dancing and started monitoring his travels, turning him into a YouTube celebrity.

“I cannot really remember how many countries I have been to. I would say more than a hundred countries, and Thailand is my favorite. I will tell the world that Phuket is so beautiful. I am planning to come back to Phuket for vacation as well,” he added.

For a sample of one of his videos click here.