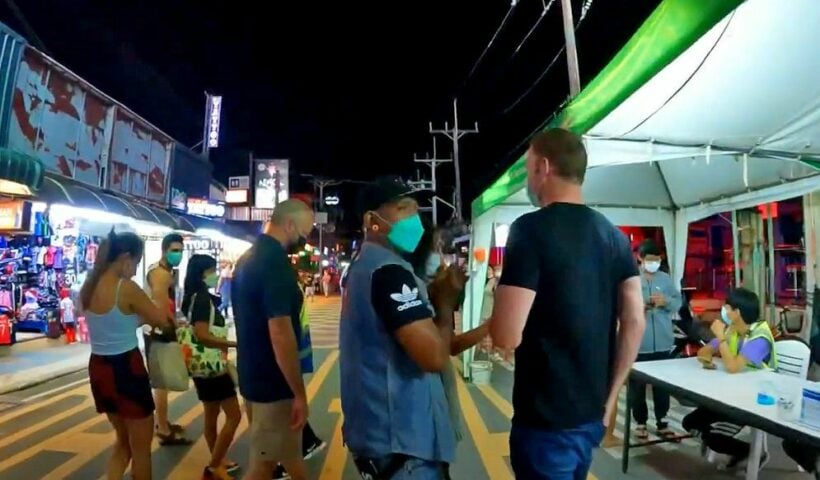 Covid infections in Phuket are creeping up again after 3 weeks of increased arrivals and a revival of nightspots and bars around the island, despite officially being illegal. Phuket’s Governor Narong Woonciew has confirmed that the number of new infections has been rising steadily over recent weeks.

The island’s bars and nightlife have been keen to take advantage of the increase in arrivals since the November 1 easing of arrival restrictions. Police and authorities appear to have turned a blind eye to the businesses reopening to customers even though Thailand’s CCSA, and the Thai PM Prayut Chan-o-cha. have pleaded with the industry to be ‘patient’. Thai media are now reporting that at least 10 venues have been ordered to “close down” along Bangla Road.

The mini outbreak has sent a wave of worry through Phuket’s community where bars and nightlife remain “officially” closed, but with alcohol allowed at restaurants, many venues serve food but operate as surrogate bars and clubs for the tourism industry. There is now fear that another lockdown could be on the way if Covid-19 infections continue to grow.

Speaking to The Phuket News, a spokesperson for the Phuket Provincial Office said that… “on November 22, 391 ATK cases were tested, and 24 were positive, representing approximately 6.1% (infection rate)”. She noted that most of the people who tested positive have few or mild symptoms.

“Most of them are entertainment venues, for socialising, drinking and eating.”

The mass testing of Patong nightlife staff has now been confirmed by a number of independent sources, including posts in Thai media showing the tests being conducted at some venues along zone.

Venues have been flouting official edicts from the Thai government and CCSA which has banned the reopening of the country’s bar and entertainment scene until at least January 15.

The Thaiger has also been contacted, independently, about multiple cases from more than one school, with both teachers and students being infected. None of these have yet appeared in official reports from the Phuket Provincial Office.

Phuket has Thailand’s highest vaccination rate after a pre-Sandbox campaign to get the island’s residents up to a 70% vaccination level before the Sandbox started on July 1 this year.

There was also 2 new Covid infections among Sandbox travellers and 1 new infection among people arriving on the new Test & Go scheme yesterday. No new deaths have been reported in the past 24 hours. 17 Test & Go travellers have tested positive since the start of the scheme on November 1.

JohninDubin
4 minutes ago, Soidog said: I’ll have to look at the rest of your post a little later John. However I just wanted to say that I totally agree with the above part of your post. At least in so…
LoongFred
10 hours ago, ace035 said: Nothing to worry about, it's just a matter of minor outbreak, just need at least 3 days of major deep cleaning around the entertainment district of Bangla Road, as long as you fully vaccinated with…

Poolie
3 hours ago, oldschooler said: covid & other disease death stats from China & India etc. are undoubtedly ludicrously understated for political purposes. so quite wrong to compare any disease stats between accountable developed nations and unaccountable undeveloped countries. …
oldschooler
18 hours ago, Poolie said: Interesting. How did you come to such a conclusion? If its not an impertinent question? Not that I want to go off topic, but you have named almost half the world. blindingly obvious. china official…

Poolie
6 minutes ago, oldschooler said: blindingly obvious. china official covid deaths around 5,000. not credible. india simply stopped counting. both countries must each have way over a million covid dead by any regular projection. europe having “ 24x asian covid…