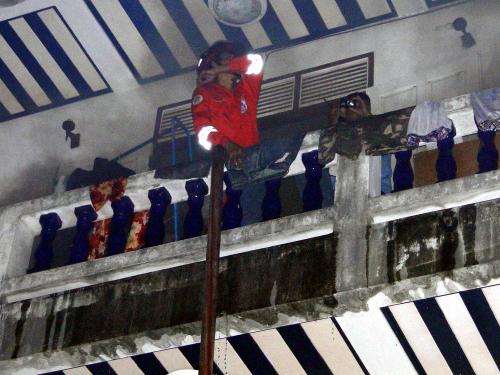 PHUKET: Police suspect a spark from an electrical socket near a bed set ablaze a third-floor apartment at the Baan Chalika complex in Patong early yesterday morning.

The fire caused an estimated 30,000 baht in damage.

Officers were called to the the four-storey apartment block, in Soi Prasertsub 2 on Ratchapatanusorn Road (map here), at 12:45am after receiving a call from the man living in the apartment next door.

“The Nepalese couple living in the apartment were not home when the fire started. They were out and the front door was locked,” Jakkapong Luang-aon of the Patong Police explained.

“Firemen had to break through the balcony windows to get in and extinguish the fire, which took about 25 minutes. Fortunately, the fire did not spread to other rooms,” he told the Phuket Gazette.

“We suspect a short circuit from an electrical socket near the bed might have started the fire,” Capt Jakkapong speculated.

“However, we have asked Phuket Forensics Police to confirm the exact cause of the fire,” he said.

Cola wars: which one passes the Phuket taste test?