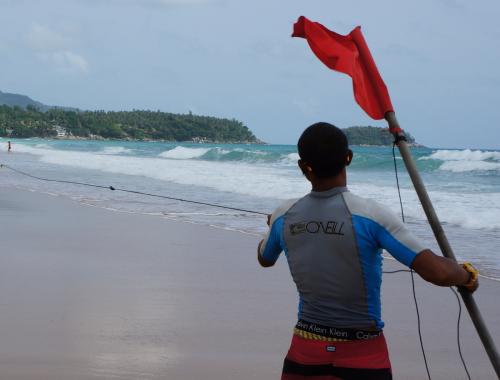 PHUKET: Lifeguards at Karon Beach, on Phuket’s southwest coast, staged a mass rescue of five tourists this afternoon after a large wave nearly swept a group of men out to sea.

Two of the men were able to struggle back to shore without assistance, while the other five needed the help of local lifeguards.

One of the men was pulled from the water unconscious and was pronounced dead after arriving at Patong Hospital.

“They went to swim in an area marked by red flags,” Karon head lifeguard Uten Singsom told the Phuket Gazette.

“Our lifeguards saw them entering the water and started to run over to stop them, but it was too late by the time they got there,” he said.

The seven men had already been carried away by a big wave, Mr Uten said.

“Four lifeguards went to help five of the men who were struggling… One of five rescued was unconscious when he was pulled from the water,” he explained.

“We administered CPR and he was taken to Patong Hospital,” Mr Uten added.

The man was pronounced dead shortly after his arrival at the hospital, staff confirmed to the Gazette.

Ramadan: Feeding the spirit by fasting