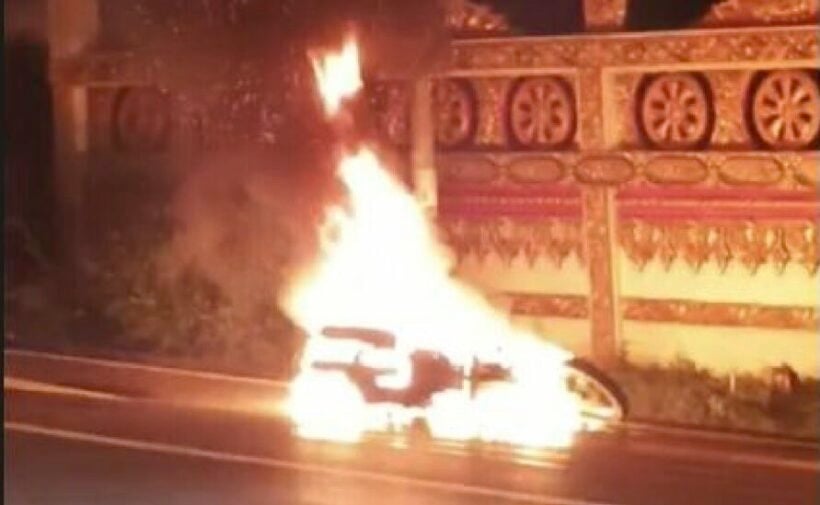 Photo by The Phuket Express, edited.

A motorbike driving down Patong Hill on Phuket’s west coast was engulfed in flames last night, as shown in a photo of the incident. Not only did the driver survive, but he was left without any injuries. The man, 54 year old food seller Niphon Mengeaid, told The Phuket Express about his close call…

“I was driving down Patong hill when other motorbike drivers behind me shouted out that my motorbike caught fire from behind. I stopped the motorbike and jumped away from the flames before locals called firefighters. ”

After Niphon narrowly dodged the blaze, his bike was destroyed. The cost of damages is estimated at 30,000 baht. It is believed that Niphon’s bike caught fire from a battery that was recently fully charged, and put under the motorbike seat. Police and firefighters arrived on the scene, taking about 5 minutes to put out the flames.

A similar incident happened in Bangkok in February when a jaguar car exploded into flames on an expressway. Like Niphon, the driver and passengers escaped and were miraculously left uninjured, although they were traumatised.

The driver said they smelled diesel fumes, then saw smoke, and then the car lit on fire. The roof and sides of the car were completely gone, and only the back looked unscathed. The front was reduced to rubble with wheels.

AdvocatusDiaboli
22 hours ago, Thaiger said: Not only did the driver survive, but he was left without any injuries. This is why this Motorcycle Accident made the news. …… it was a one in a Trillion event to happen in Thailand,…

Patong man talked out of jumping from hotel