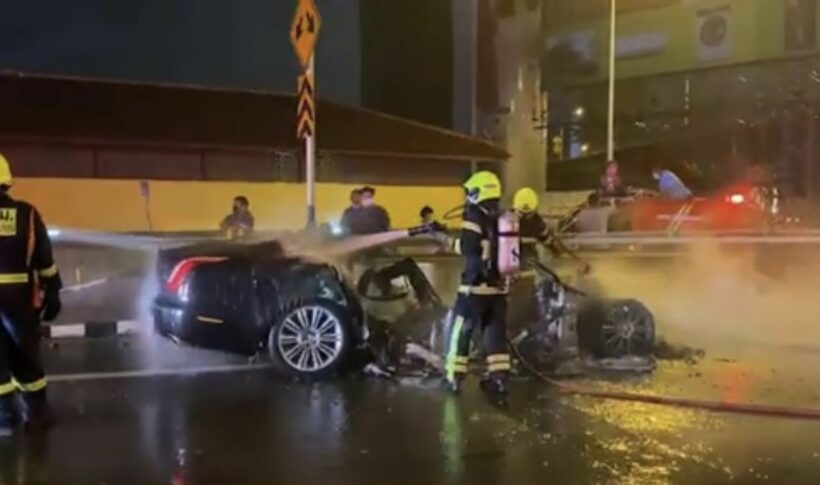 Bangkok police are investigating why a black Jaguar car exploded into flames on the Charlerm Maha Nakhon Expressway last night. The driver and passengers escaped and weren’t physically hurt, but they were traumatised. The driver said they smelled diesel fumes, then saw smoke, and then the car lit on fire. He said he didn’t leave the car in any suspicious places, and others hadn’t driven it.

The Expressway Authority of Thailand towed the little that remained of the burnt luxury car to an expressway police station. The driver will meet with police today as they investigate the mysterious fire. The Thai traffic and safety news radio station FM91 Trafficpro posted a video about the incident on their Youtube channel. The video is about two minutes long, and shows firefighters hosing down the scorched remains. The roof and sides of the car are completely gone, and only the back looks unscathed. The front is reduced to rubble with wheels.

Transam
20 hours ago, butterfly said: Indian made cars, what else could you expect 🤣 Thought they were made in the UK......? 🤔

Lyp14 [ctxa]
6 hours ago, Transam said: Thought they were made in the UK......? 🤔 They are; however Jaguar now belongs to TATA motors (Indian). But still, they are manufactured in the UK.

Transam
13 hours ago, Lyp14 [ctxa] said: They are; however Jaguar now belongs to TATA motors (Indian). But still, they are manufactured in the UK. Yes, I know, I was just... 🤔....the India made 'bash'..... 🤭
joseph
I believe someone tried to bypass the import tax. They import the parts separately and reassemble them. It's called SKD (semi knock down) in the industry. Very common. It works well unless you have your gardener or local handyman assemble…

TheDirtyDurian
People knock Jaguar, but for me it's the best thing I've ever driven. Had an XF for a while that I took on a roadtrip all through Europe, and the UK. Best driving experience ever. Pure and simple, no matter…

Test and Go might extend to land and sea tourists, cruise ships