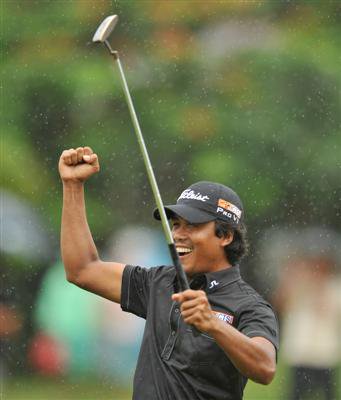 PHUKET: Juvic Pagunsan from the Philippines recorded his first win on the Mercedes-Benz Tour yesterday following a runaway seven-stroke victory in the US$60,000 Mercedes-Benz Masters Thailand at Laguna Phuket Golf Club.

Starting the day with a four-stoke lead he closed with a five-under-par 65.

Thailand’s Udorn Duangdecha claimed outright second after shooting a 68 while Lam Chih Bing from Singapore was one stroke further back in third position. He carded a 67.

The talk of the town has been the phenomenal performance of 13-year-old Pinsawat Pariwat, an amateur golfer from Phuket closed with a 70 to finish tied fifth.

Pagunsan bogeyed his first hole but then carded six birdies, including four in the last six. He finished with a four round aggregate of 19-under-par 261.

“This is really special. It is only my second win as a professional overseas. My wife and young daughter are also here so it’s very emotional,” said Pagunsan.

The 32 year old has come close to winning a couple of times this year on the Mercedes-Benz Tour with two top-10 finishes but has fallen back over the closing stages.

“I have been working hard on my swing with my coach Junced. It was too upright and so we had to flatten my backswing. It’s now working and my confidence is sky high,” added Pagunsan, who won US$9,750.

Udorn, who won the Mercedes-Benz Tour’s second event in Pattaya, once again showed that he is enjoying one of the finest periods of his 10-year professional career.

“I am just putting so well this year. I wish it had been like this all my career,” said Udorn, who once again wore striking Tiger striped pants much to the delight of the huge galleries.

Pinsawat had a nervy two over par front nine back came back two under and has firmly establish himself as one of the region’s most exciting young prospects.

“I learned a lot this week playing with the professionals. I need to work on my driving to play well at this level. I was not hitting it straight. This week has given me so much confidence ahead of my first trip to play in America next month,” said Pinsawat, who nickname is ‘Gress’ as in progress.

His grandfather Prachuab Sabcharoen caddied for him. Mr Prachuab is the current youth team coach in Phuket and a former president of the Thailand Senior PGA.

All the more remarkable is that Pinsawat was a last minute sponsor invite after being recommended to play by Martin Carpenter, MBE, British Honorary Consul in Phuket and the foreign co-ordinator for the Thailand Golf Association junior golf program for southern Thailand.

Phuket Expo dream: Could it end our transport nightmare?