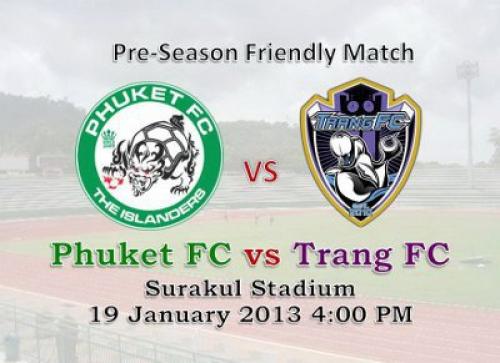 PHUKET: Football fans will get a chance to see the new-look Phuket FC in action for the first time this year, with the Islanders set to take on Division 2 Southern regional champions Trang FC later today.

The pre-season friendly match will be played at Surukal Stadium with a 4pm kickoff. Admission is free for all.

Operating with an estimated annual budget of about 90 million baht – three times that of last season – the Islanders have been extremely active in the transfer market.

The team has brought in around 10 new players to bolster the squad so far, with still more signing announcements expected before the regular season commences in early March.

The one and only season goal: promotion to the elite Thai Premier League.

Several familiar players, however, will not be helping them reach that goal.

Also departing Phuket were Brazilian midfielder Marcio Santos and Korean midfielder Byeon Seong Won, who both have transferred to Rayong United, one of four teams recently promoted to the Thai first division as a result of the 2012 AIS Champions League playoffs. (The other three teams were Trat FC, Rayong FC and Ayutthaya FC.

Another key player who left Phuket and transferred to another Division 1 rival this season was star Thai striker, Thawin Butsombat, who has joined rivals Bangkok FC.

Thawin was a leading scorer for Phuket last season after he had been out for most of the 2011 season due to a major leg injury.

Nonetheless, fans will get to see Thawin, Santos and Seong Won in at least four matches this season, albeit on the opposing team.

Another player not on this year’s roster is Roland “Pato” Vargas, the Bolivian/Brazilian midfielder who joined Phuket midway through last season.

Pato has returned to Brazil, the Phuket Gazette has learned.

Filling in the gap left behind is a new promising lineup of players to be put to test later today.

Transferring to Phuket from PTT Rayong was Korean midfielder Yagin Chun, who has been reunited with his twin brother at Phuket FC, Boas Chun.

Also in the midfield, the Islanders will employ two skillful foreigners including Georgian midfielder, Giorgi Tsimakuridze, 29, who transferred from TPL side Bangkok Glass, as well as French midfielder Geoffrey Doumeng, 33, a transfer from Chonburi FC, the TPL 2012 runners up.

Doumeng has played for Montepellier in France’s Ligue 1, among others.

Leading the attack will be 25-year-old Brazilian striker, Luiz Eduardo Purcino or “Dudu”, who transfered from Thai Premier League side, Osotspa Saraburi FC.

Helping out in defense will be imposing center back, Moudourou Swa Moise, an experienced 27-year-old Cameroonian, joining on loan from Suphanburi FC.

Fan favorite, Phuket’s longest-standing foreign player, Nenebi Tre Slyvester remains at the club and fans will be hoping he can form a formidable partnership with Moudourou Swa Moise.

The Islanders conceded 48 goals in the Yamaha Thai Division 1 last season and scored 41.

Young and promising goalkeeper, Kampol Phatomakkakul, a former pupil of Satree Phuket School, has been called up to represent Thailand’s football team in the 27th SEA Games to be held in Myanmar, meaning he will miss the team’s pre-season friendly against Trang today.

Though Trang won the AIS Southern region title title last year, it failed, along with regional runners up Pattani FC, to get promoted from the champions league playoffs.