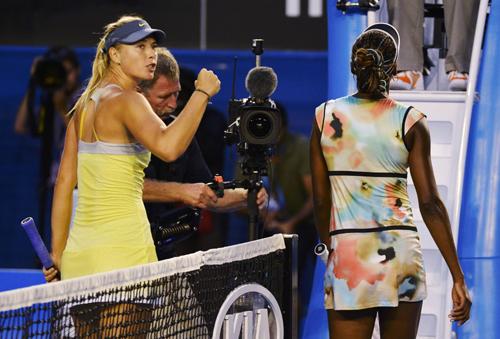 Merciless Sharapova eclipses Venus to reach fourth round
Reuters / Phuket Gazette
PHUKET: Maria Sharapova missed out on a third successive ‘double-bagel’ but humbled Venus Williams 6-1 6-3 to charge into the fourth round of the Australian Open today.

The center court crowd was left stunned as the second-seeded Russian scorched to a 4-0 lead in the first set to rattle her American opponent, and charged on in the second set to wrap up the match in 79 minutes on a chilly evening at Rod Laver Arena.

The 25th-seed Williams sparked raucous cheers by breaking Sharapova and holding her serve late in the second set, but the Russian sealed the match with an ace and unleashed a fist-pumping shriek.

Sharapova will next play Belgian Kirsten Flipkens as she continues her bid for a fifth grand slam title and second at Melbourne Park.