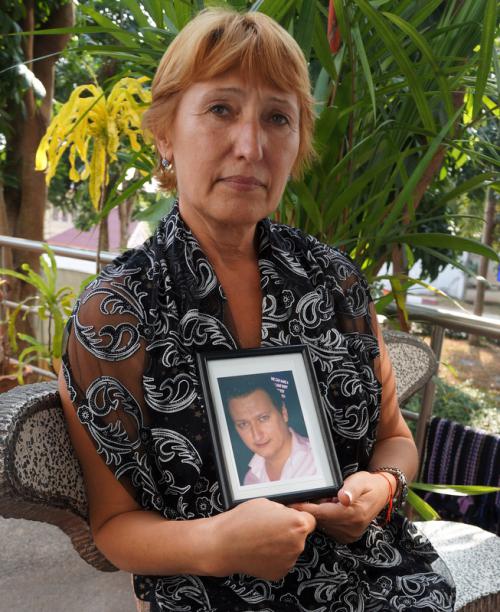 PHUKET: The mother of Maxim Schantz, who was murdered in Phuket two years ago, arrived today at Phuket Provincial Court for the sentencing of one of her son’s murderers, Johan Sebastian Ljung.

“Maxim was a very good son. He was beautiful. He had his father’s eyes,” Yvonne Schantz, 55, told the Phuket Gazette.

“I had two children: Maxim and his sister. My daughter was six months pregnant when Maxim was killed.”

“He was very happy when he found out about his sister’s pregnancy. He wanted to see the baby – he loved them both so much.”

“She has now given me a grandson, I wish that he could be Maxim reborn. Such a thought makes me happy – I miss my son. I miss him so much.”

Maxim and his mother first visited Thailand about six years ago. Then, in 2008, Maxim moved to the Kingdom. After Maxim’s murder, Mrs Schantz gave up her work in Sweden and started staying in her Pattaya apartment for longer stints of time, so she could follow the trial more closely.*

“I used to have a business in Sweden. Now, only my husband is working there,” Mrs Schantz said.

Mrs Schantz’s last conversation with her beloved son was on July 30, 2011, two days before he was killed by Mr Ljung and Tommy Soderlund at the The Lantern housing development in Koh Kaew (story here).

“He called asking me when I would come to visit him in Phuket. I told him I would come sometime in the next week. I was in Pattaya,” she said. “If I had come to Phuket on Sunday [July 31], my son might not have been killed.”

The man sentenced to life by the Phuket court today (story here) called Mrs Schantz on August 2, the day after he killed her son.

“Johan was the one who called and told me that my son was murdered,” Mrs Schantz said.

“He called at about 2am. I could not believe that my son was dead.”

Mrs Schantz rushed to Bangkok where she was able to catch a flight to Phuket at about 5am. The Swedish Embassy called to inform her of the death later that morning.

“That was the only time I was contacted by them [the embassy]. I only knew about the trials through news websites,” Mrs Schantz said.

Mrs Schantz arrived at the court today with a photo of Maxim. She wanted Mr Ljung to apologize to her and her son.

“Unfortunately, I was not in the room when Johan was sentenced. They told me the sentencing had been postponed until the afternoon,” Mrs Schantz explained. “I wish I could have been there.”

Despite missing the sentencing, Mrs Schantz was happy with the outcome.

“I hope Tommy gets the same. I hope they both serve their prison terms in Thailand,” Mrs Schantz said.

She was unmoved by the 12.5 million baht of compensation the court ordered Mr Ljung to pay to the family.

“I do not care about the money… I only want them to be locked up,” she said.

“One time, I read in the news that they would be freed. I was so frightened – I thought they might come after me.”

“Later, I found out that the report was wrong.”

Mrs Schantz vowed to return to Phuket for the sentencing of Mr Soderlund.

“I want to hear him apologize to me and my son. Johan apologized to me once when I visited the pair of them in jail – but Tommy never did,” she said.

* The Gazette originally reported that Mrs Schantz had perminatly moved to Pattaya in 2011.

Thailand third worst in the world for road deaths; Phuket killing someone every three days