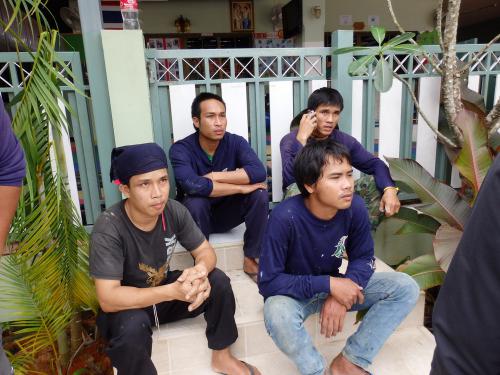 PHUKET: A business partner at a popular local kindergarten in central Phuket was shot dead this morning after an argument escalated over noise and dust caused by an electric sander drifting into a neighbor’s house.

Pairote Sompet, 48, who lives in a house next to the school, presented himself to police before officers had the chance to arrest him for the shooting murder of Kamnoon Saengwanloy, 49.

Mr Kamnoon and several workers were sanding a fence at Kajornkiet School* in Ucharoen Village, Pa Khlok, about one kilometer from the Heroines Monument (map here), in preparation to repaint it.

“Mr Pairote told Mr Kamnoon that he objected to what he was doing, and Mr Kamnoon said that he was just doing his job,” Chumpol Keawsorndee, 24, one of Mr Kamnoon’s employees, told police.

“Then they argued louder. Mr Pairote went into his house and came back with a handgun. He blasted away three shots at Mr Kamnoon,” Mr Chumpol added.

Mr Kamnoon was shot in the head, right hand and back with a .45 firearm, explained Thalang Police officer Narong Muangduang.

“Then Mr Pairote came to the station to surrender himself,” Capt Narong said.

Officers at the scene, in a quiet family neighborhood, gathered evidence as Mr Kamnoon’s body was taken to Thalang Hospital.

The Gazette notes that the Kajornkiet School kindergarten (Facebook here) is not in any way associated with the well-known Phuket international school Kajonkietsuksa School (click here).