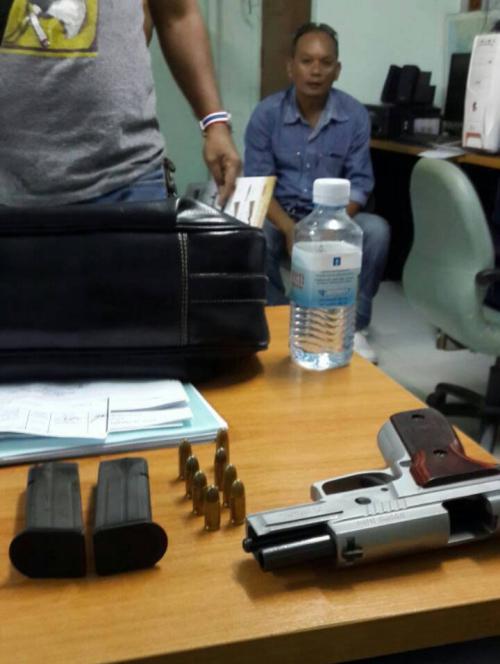 PHUKET: A man who thought it was a good idea to show all the ladies along his street in Patong that he had a big gun in his pants has been arrested and charged with possession of an illegal firearm.

He was also charged with carrying a naked weapon in a public place.

“We received a report that a man was walking around telling all the women along the street that he had a big gun and was proving it by revealing a naked weapon he kept in his pants,” said Lt Col Somsak Tongkliang of the Patong Police.

“Of course, after receiving such a report, we turned up at the scene expecting to find a naked man wandering around.

“Instead, we found Sutin Khamkom, 30, with a semi-automatic pistol bulging in his trouser pocket,” he said.

Mr Sutin was taken quickly into custody and escorted to Patong Police Station.

“We found he also had two magazines loaded with a total of eight bullets that he showed the ladies,” Col Somsak said.

The gun was identified as a 9mm.

“Mr Sutin was charged with illegal possession of a firearm and ammunition in a public place” Col Somsak confirmed.

“He accepted the charge and told the police that he only used it to show off. When the ladies saw it, they would think they’d be safe going out with him,” he added.