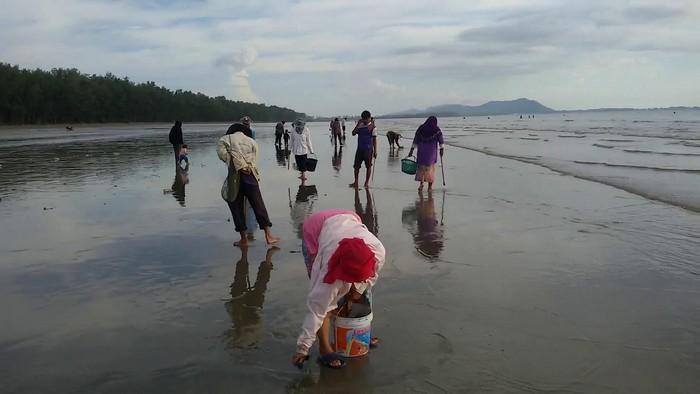 KOH LANTA: Enterprising villagers on Koh Lanta are earning up to 3,000 baht a week getting their hands dirty collecting shellfish.

The coastal village entrepreneurs are making ends meet by digging in the wet sand at nearby beaches for ‘tapao’ shells – a type of edible clam-like mollusk that appears in the area at the end of the monsoon season – and selling them for about 420 baht per kilogram.

The clams are selling well locally and are also a hit with Hong Kong diners, who pay more for having the mollusks imported.

Hundreds of people can be seen in the mornings, poking sticks in the sand along Thung Talay Beach in Koh Klang sub-district, looking for the shellfish, which are found a few inches under the surface,

For some of the shell hunters, the mollusks are a source of food as well as a source of extra income.
The shell collectors say the price per kilogram for the shells has recently risen from 130 baht to 420 baht as the delicacy grows in popularity here and abroad, earning them between 1,000 to 3,000 baht a week.

Local resident Putphong Raktua, 40, got in on the act after joining her neighbor for 5am forays, collecting about 3kg of the shells each day. “We eat a lot of them too. They’re delicious,” she said.

Ms Putphong said the shells cannot always be found there. “We are rushing to collect them now because they are only here for short periods in the year”.

Lanta Fishery Office chief Sakda Thaweemueng said the mollusks arrive in Krabi with high tides just after the monsoon season. They are collected during low tides.

“They are tasty and can be used in a variety of dishes, making them popular domestically as well as for export, fetching between 360 and 420 baht per kilogram,” said Ms Sakda.