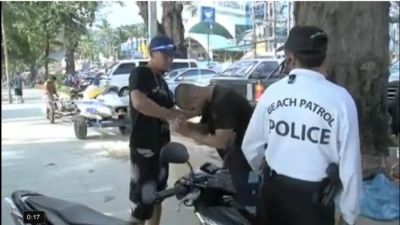 PATONG, PHUKET: New footage has emerged showing Phuket’s infamous jet-ski man, Winai ‘JJ’ Naiman, in another dispute with marines – this time from the US Navy.

The footage ends with one US serviceman handing over 40,000 baht to the jet-ski boys.

In the latest incident, apparently filmed a few days after the British marines’ run-in with Mr Winai, the US servicemen do not deny causing the damage and appear highly apologetic throughout.

One marine, apparently responsible for ‘damage’ to a jet-ski, gives a bowing wai to Mr Winai, saying “Sir, sorry. I’ll pay you back, I promise.”