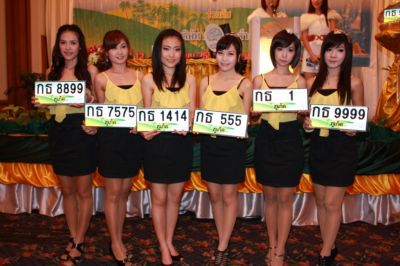 PHUKET: A man paid 800,000 baht for a single license plate at the Department of Land Transport’s 5th Annual License Plate Auction at the Metropole Hotel in Phuket City last weekend.

Kampanat Thantiwat was the winning bidder for the plate ‘Kor Tor 9999′, the most expensive at the auction.

Department of Land Transport Director General Chairat Sa-nguanchuen presided over the event, which was attended by around 400 people eager to get their hands on the ‘beautiful’ numbers.

A total of 304 plates went under the hammer, raising 18,745,500 baht for the Department of Land Transport’s ‘Don’t Drive Drunk’ campaign.

Hydrofoils the latest boon for Phuket