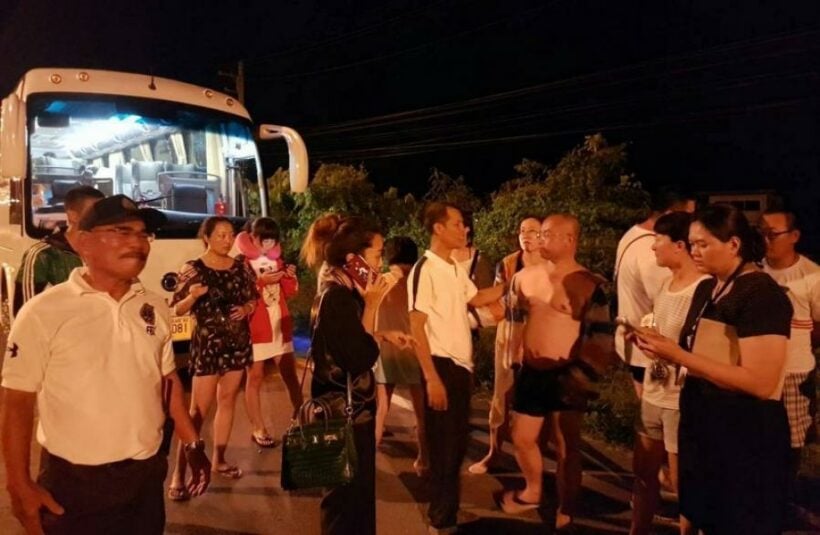 PHUKET: Police are hunting for an illegal Chinese tour guide who abandoned 24 Chinese tourists at the side of the road in Phang Nga yesterday evening after arguing with them about money.

The tourist police received a report of the incident from the Chinese Consul in Phuket at about 7pm. The tourists had called the consulate for help after they were left stranded on the Kok Kloi-Phang Nga road.

“At the scene, we found 24 tourists standing outside the bus, along with Nipon Choochom, the bus driver, and Teerasak Saehuang, the Thai tour guide. The Chinese guide, known only as Ms Ammy, had already run away,” said Capt Pittaya Thanawut of the Phuket Tourist Police.

After questioning the driver and Thai tour guide, police found that they were heading to the 777 restaurant in Phang Nga for dinner.

“On the way there, Ms Ammy started arguing with the tourists about some ‘additional fees’ for the Similan Islands trip they had just completed. When the tourists threatened to inform the Chinese Embassy, Ms Ammy asked the bus driver to stop the bus and then ran off,” said Capt Pittaya.

The passengers, driver and tour guide were taken to Khok Kloi Police Station for further questioning.

The tourists told police that they had booked tours with the Xin Xing Travel & Trading Co Ltd. They had arrived in Phuket on April 29 and were scheduled to leave on May 6.

Police then called the company’s representatives to the station for negotiation.

“The tour company agreed to upgrade the travellers’ hotel rooms and food for the remainder of the trip, changed their tour guide and offered a two-hour spa massage package,” he added.

Thai tour guide Mr Teerasak was charged with allowing others without a guide licence to perform his duty for him.

“Beside taking action against Mr Teerasak, we are now working on tracking down Ms Ammy, and are also investigating the company for hiring an illegal tour guide. We have yet to charge the company as we are awaiting further evidence,” said Capt Pittaya.