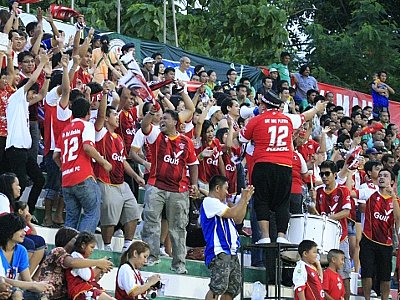 PHUKET: FC Phuket suffered its first home defeat of the season on Saturday, going down 2-0 to the Saraburi FC Warlords.

Cheered on by about 200 red-shirted supporters, the Warlords controlled the game from the start.

Injury-stricken FC Phuket looked lackluster and disorganized, especially without Sarach Yooyen, out with the flu, and Abdoul Coulibaly, who ran on as a substitute mid in the second half.

The second and final goal came in the second minute of added time at the end of the first half, when Djomon slotted the ball between the near post and FC Phuket goalkeeper Theerawat Pinpradub.

The second half saw Phuket play more attacking football, but much of it was “long ball”.

However, Saraburi goalkeeper Jakkarin Boonmee was up to the task when needed, making several top-class saves to deny the Southern Sea Kirin through to the final whistle.

FC Phuket’s next home match is on May 29 against Buriram FC, to whom Phuket narrowly lost 1-0 to in the championship match of the playoff promotion mini-league in late December.

FC Phuket will travel to Chantaburi on Saturday. Kickoff is at 6pm.