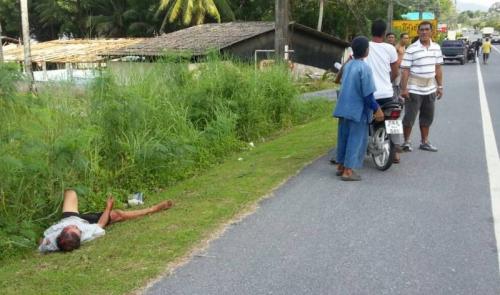 PHUKET: A helmetless driver of a motorbike with sidecar died after a high-speed collision with a big bike travelling at high speed in Thalang on Saturday evening.

In the middle of the road was a motorbike with an attached sidecar. The helmetless-driver of the saleng was laying on the side of the road with a broken leg and head trauma, said Lt Col Prakob Boonkwan of the Tah Chat Chai Police.

Witnesses told police that the saleng driver, Pradit Portao, 47, had cut across the road to get to the u-turn lane. In doing so, Mr Pradit cut in front of Panya Suksai, 32, who was driving his Kawasaki big bike at high speed.

Mr Panya, who was wearing a helmet, was found lying near the road median.

Mr Pradit was taken to Vachira Phuket Hospital, and pronounced dead at about 9pm that night.

Mr Panya was taken to Bangkok Hospital Phuket for treatment.

Hospital staff confirmed to the Phuket Gazette this morning that Mr Panya is safe, but is still at the hospital receiving further treatment.

Leading candidate as Phuket’s new top cop “open to all’