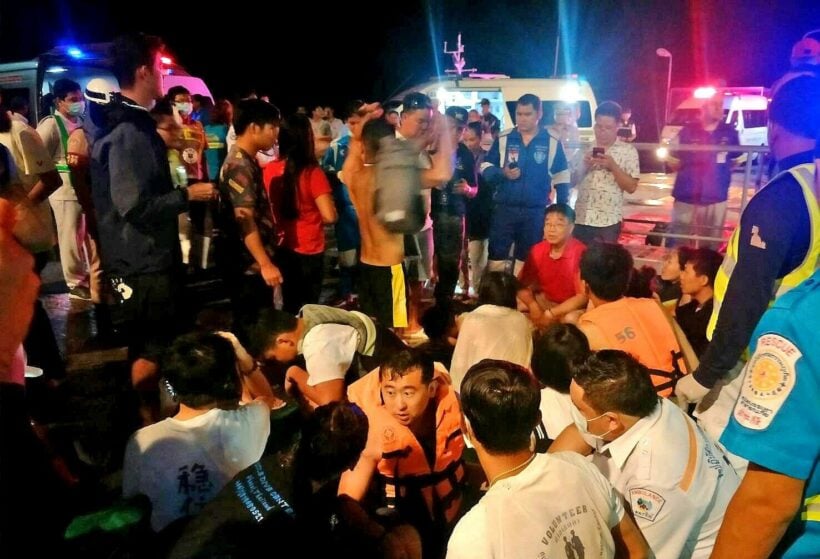 Who’s responsible for the ‘Phoenix’ boat disaster, the worst maritime disaster in Thailand since the Indian Ocean tsunami of 2004?

Whilst events of the fateful evening on July 5 remain under investigation, awaiting a full court hearing down the track, there are some things which are very easy to pinpoint along the faltering chain of command.

On the night of July 5, from anecdotal evidence of passengers who survived the boat’s sinking and videos taken at the time, it appears that there were many passengers still in the lower decks of the boat, some of them in compartments from which they never escaped. Many weren’t wearing any sort of bouncy aid at the time, let alone a proper fit-for-purpose life jacket. Many others, as can be seen in the videos, were wearing simple ’bouyancy aids’.

The Thai captain and crew of the vessel escaped on the boat’s two life rafts, unharmed, leaving many people still downstairs as the boat began to sink.

From the videos we’ve seen it was chaos and panic – most, if not all, of the Chinese passengers could hardly swim, let alone survive in the rough seas many of them fell into.

Disturbingly, there were 13 children that died in this disaster. Many were later found dead, floating face down, not far from their deceased parents. If they were wearing proper life jackets they, along with their parents, would have had a much higher chance of survival.

The tour boats that ply Phuket’s waters, to the islands and around Phang Nga Bay, usually require their guests to wear basic buoyancy aids. These have floatation around the vest giving, as the name suggests, a basic aid to the floatation of the wearer – an aid for swimming, not much else. They are quite different from a life jacket that has almost all its floating capacity supporting the neck and in the front of the wearer. This forces the wearer onto their back and keeps the head above the water.

A fully-inflated life jacket can be quite cumbersome when walking around a boat so most of the newer versions, like on planes, automatically inflate when you hit the water, have a rip chord to inflate manually or can be simply blown up or ‘topped up’ with a tube. They also have a whistle attached to attract attention, something none of the vests, worn by passengers on ‘Phoenix’, had.

The basic rule, while at sea, is that the captain is in charge. If he or she says put your life jackets on, you do. They are in control of the vessel. The captain of ‘Phoenix’, currently in custody (along with the Thai ‘owner’ of the vessel), claims that the waves were 4-5 metres high. Even if that emerges to be an exaggeration, as some claim, the boat was of a length (29 metres) and size that should be able to cope with those conditions.

Seafarers know that, in most storms, you would continue head to wind, straight towards the waves, at a low speed – uncomfortable for passengers but totally survivable by a boat the size of ‘Phoenix’. That’s assuming that the design was such that it had sufficient weight low-down and wasn’t top-heavy, making the design more inclined to capsize. The courts will decide on that fact when the full evidence is presented to the presiding judge.

But the events on the actual day appear to be the thin end of the wedge with a litany of systemic negligence leading up to July 5.

Who ticked off on the design of ‘Phoenix’ – that the boat would be suitable for carrying up to 100 passengers and crew, safely? Who checked the construction of the boat as it was being built, and then when it was completed and launched to ensure that all the requirements of the engine, construction, engineering, equipment and safety equipment were met? Who was responsible for the qualifications of the Captain and crew and their fitness to handle a vessel of this size with up to 100 passengers? What safety training did the crew receive to handle an emergency? And who ticked off on their certification of ‘Phoenix’ – the final paperwork allowing to operate at sea as a tour boat?

For the company that owned ‘Phoenix’ – allegedly a Thai shelf company with a Thai nominee holding the majority shares but actually being controlled by Chinese citizens – who was checking the bonfides of the company structure? There’s little use accusing the Chinese money trail behind the company when there are laws in place preventing this type of thing from happening. Which accountant signed off on these company documents?

And who decided that the vessel should go to sea on that day when warnings had been issued? Or at least seen the storm approaching on their radars and sought shelter (as many other boats did on the day).

As the yacht was constructed in Phuket, the answer to all these questions is Thai officials and professionals – officials that were allegedly qualified and authorised to tick off on all these standard compliances. Apart from the head of the local Marine Department being ‘side-lined’ pending further enquiry, we haven’t yet heard much about the designer, the engineers, the safety inspectors or training regimens of the tour boat crew. Or who missed the company documents.

And then, sitting above these people, with the final responsiblity, is the island’s Governor.

Phuket Governor (at the time) Noraphat Plodthong has fronted most of the media briefings where the latest bad news in the boat tragedy has been presented to the local media. He’s also been the face of Phuket with the sad task of having to meet with survivors and relatives and listen to the concerns from the Chinese Ambassador to Thailand.

The Thaiger’s main reporter says that very few questions were asked by journalists at those media presentations, beyond the current situation and the rising numbers of dead Chinese found floating around the Andaman Sea. But questions as to people’s responsibility in the sinking were rarely raised.

Whilst the blame game will continue, and Phuket’s Provincial Court eventually convenes to hear all the evidence, it is quite apparent that it is a long, long period of non-compliance to standing maritime laws, blind-eyes being turned (for reasons we hope emerge in the hearings), correct procedures not being put in place and a somewhat ‘sabai sabai’ attitude to the entire issue of marine safety beyond a few media releases and photo opportunities.

Finally, there’s the role of the media in all this. When tragedies have occurred in the past the media seem more interested in getting a photo of the line-up of dignitaries than following up the nitty-gritty of the incident. The investigative reporting that may may reveal some of the systemic failures, and courageous owners who would publish these stories, never happened.

For the foreign media in Phuket this is a complicated issue as we’re ‘guests’ working here and are generally told not to ’step on toes’ in our reporting of local news lest we find problems arising in our Work Permits or Applications for visas. And, in some cases, those who have risen to the challenge and published damaging news about Thai ofiicials, are now no longer working in their capacity as publishers of news in Thailand.

The full investigation is yet to wrap up but some of the key people are now in custody, insurance companies are making payments and the Chinese families have either buried the 47 passengers that died or repatriated their bodies for arrangements back in China.

If not for the huge amount of attention on the Tham Luang cave story in Chang Rai, by any standards, the sinking of the ‘Phoenix’ and the deaths, including 13 children, of 47 Chinese citizens should have made lead-story headlines. It didn’t, except in local media. In some ways Phuket dodged a media bullet.

The fallout of this tragedy – in terms of Chinese tourism to the island and the findings of court cases in relation to this matter – will be more apparent in time. But if just a few of the many, many mistakes that were made along the way could have been prevented there is a strong chance the 47 tourists would still be alive.

Thai PM visits Phuket today – this is what he’s doing