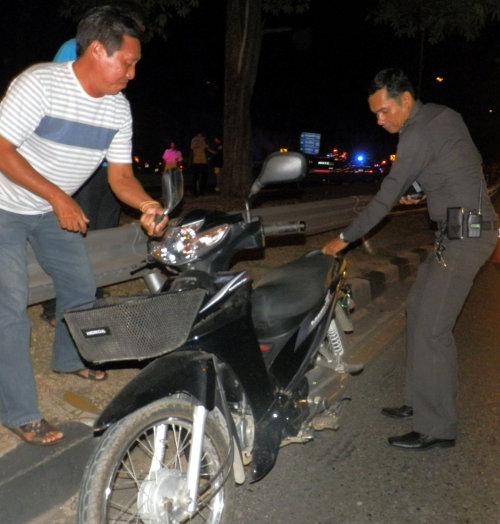 PHUKET: A Burmese man working in Phuket was killed and another injured when the motorbike they were riding slammed into a roadside guard rail at high speed near Baan Sapam Mongkol Wittaya school (map here) Wednesday night.

The driver, Zaw Min Oo, 37, died at the scene. His passenger, Myo Aung Chay, also 37, suffered a broken leg and was taken to Vachira hospital.

Mr Myo told police that the two were en route from Phuket Town to Thalang to have a party with friends, said Phuket City Police Duty Officer Chaleaw Taihoo.

An unopened bottle of liquor and a bottle of coke were found about 300 meters from the scene.

“Mr Zaw was driving at high speed and failed to slow down as he arrived at the Khuan Din Daeng curve, lost control of his motorbike and hit the guard rail,” Maj Chaleaw said.