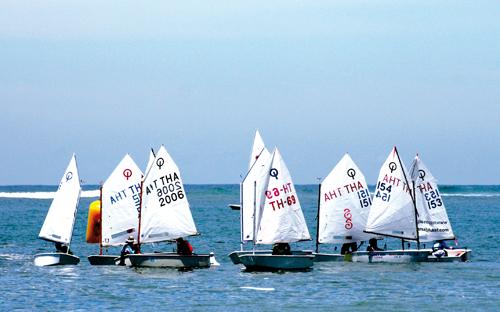 PHUKET: Talented young sailors are getting anxious to show their seniors how sailing is done, with an inaugural Junior Phuket Raceweek to be held on the day before the 10th anniversary of the island’s premier Phuket Raceweek regatta concludes.

An innovative idea, Junior Phuket Raceweek will be contested off Panwa Cape, the Southeastern most tip of Phuket, with plans to expand the competition from 2014 alongside its the Cape Panwa Hotel Phuket Raceweek.

“Currently there are limited opportunities for young sailors on the island to competitively race, and for resident youngsters to race against non-Phuket sailors,” said Byron Jones, managing director of organizers Media Business Services (MBS).

“We want to encourage future sailing talent and give youngsters of all nationalities a platform to compete and develop, and at the same time give something back to the Phuket community,” added Jones.

The 2013 Junior Phuket Raceweek expects to welcome over 30 youngsters, in Optimists, Bics, Toppers and Lasers, who will compete in up to six races on Saturday July 20. The competition is expected to be exciting and challenging with strong support from Ao Chalong Yacht Club and the Phuket Youth Sailing Squadron who will be sending teams to compete.

Phuket’s east coast and the Panwa area offers some of the best sailing conditions on the island during July, and together with co-hosts Regent Phuket Cape Panwa and Panwa Beach Resort Phuket, the area is an ideal location for the inaugural Junior Phuket Raceweek.

Registration for Junior Phuket Raceweek will take place on Friday, July 19 at Regent Phuket Cape Panwa between 1pm and 5pm, followed by an opening party with racing on Saturday July 20.

For more details on the event, visit juniorphuketraceweek.com.

The event is proudly sponsored by the Phuket Gazette, PGTV and ‘Phuket Today’, the island’s only national television show, aired daily on True Visions (channels 99 and 58).