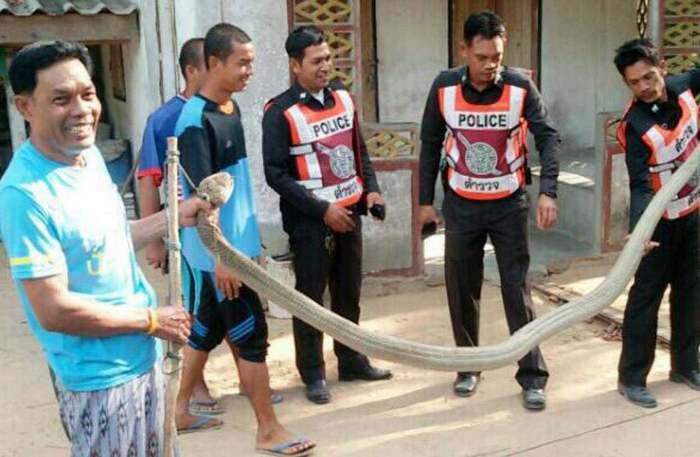 KOH LANTA: A Koh Lanta local was able to catch a five-meter-long king cobra that made its way into his neighbor’s garden, using a stick-and-rope technique that he learned on YouTube.

Worawut Longasan, 56, volunteered to nab the snake, which was hiding under a wooden bench. It only took him a few minutes to bag the nearly 30 kilogram cobra using a small stick and a looped piece of rope.

His neighbor had called the authorities for help when she heard her chicken clucking loudly as the snake attempted to devour it. The village headman and local police arrived at the scene, but Mr Worawut took control of the situation.

“This is the biggest and longest snake that I have ever caught,” Mr Worawut said. “I believe that it came to the house because there is a lack of food and water in the forest due to the hot weather.”

Nonetheless, the reptile was released back into the forest for fear that keeping it would only lure more snakes into the area.

Mr Worawut warned people not to attempt to catch a snake if they do not have prior knowledge or experience.