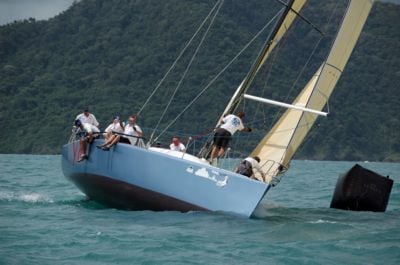 AO CHALONG: Perth-based sailor Peter Ahern, skippering his new boat Yo!2, left the rest of the fleet in his wake at this year’s Six Senses Phuket Raceweek with eight wins from eight races to take the honors in the top-flight IRC 1 class today.

Ahern, who is also the Commodore of the Royal Freshwater Bay Yacht Club in Perth, finished well in front of his nearest rival, fellow Aussie Ben Copely on Katsu, in every race.

Another sailor from down under, New Zealander John Vause, skippered his boat Ruby Tuesday into third place in the hotly contested IRC 1 class.

This year’s Six Senses Phuket Raceweek was blessed with strong winds on each of the four days of racing, which took place over various courses off the southeast tip of Phuket from Thursday to Sunday.

After some fine sailing early in the regatta, Stuart Crowe and his crew on Cinders had their hopes dashed for a podium finish after their mast broke on Friday. “She fell on the deck, but luckily no-one was injured,” said Crowe.

Regatta organizers Grenville Fordham and Andy Dowden from Image Asia managed to just get onto the podium with a well-deserved third place in the Club Charter class, finishing behind eventual winner Andrew de Bruin from Australia on Awatea and second-placed Horst Lakits on Big A.

Fordham and Dowden were in line for a better finish, but ran aground on Saturday and lost a lot of time before managing to get their boat out of the mud and back in the race.

The next Andaman Sea Pilot book is expected to include “Dowden’s Shoal” off one of the islands near the southern end of Phuket.

The most closely contested class was the Firefly 850s, which are designed and built in Phuket.

The Six Senses Phuket Raceweek is the fastest growing regatta in Asia, and judging from the 40% rise in entries this year, it will soon be one of the biggest international yachting events in the region.

The results posted above are provisional only and may be subject to protests. Click here for the latest results.