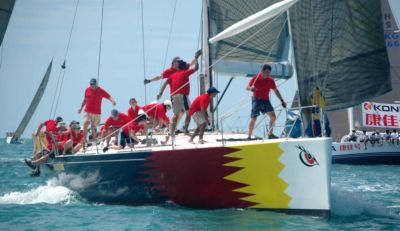 KOH SAMUI: The 7th Samui International Yacht Regatta will once again serve as the grand finale of the Asian Yachting Grand Prix Championships series, with this year’s event running from June 1 to 7.

Callum Laing, the new organizer of the event, plans to bring this year’s competition to a new level while maintaining the same laid-back island style of years gone by.

“We really appreciate the huge effort the many international participants make to attend the Samui Regatta year on year, and guarantee another great event in 2008,” he said.

Bangkok-based MobyElite will be running the event, and local Samui sailing celebrity Francesco Brancaccio has been appointed to head up the island management team with Race Officer Tony Denham making his third return to take charge on the water.

Renowned international judge Mark Pryke, also from Australia, will bring his vast knowledge and experience in Asian regattas to bear, returning as head of the jury. Meanwhile, long-serving directors Marc Ribail and Peter Plant are looking forward to yet another successful event.

Organizers say that Matt Allen’s Ichi Ban is being shipped from Dubai, fresh from her recent victory at the Maktoum Cup, to fight for the Premier Racing class title.

Ray Roberts on Quantum Racing, who has already wrapped up the Asian Yachting Grand Prix championship, is also expected to join the race. He will face some stiff competition from rival Frank Pong on Jelik and defending Samui champion Bill Bremner on his new Foxy Lady IV, a TP52 recently shipped in from the US.

Many other familiar faces on the Asian yachting scene are set to compete, including Sam Chan on Ffree Fire, Neil Pryde on Hi-Fi, Fred Kinmonth and Nick Burns on Mandrake and Chris Meads on his new Corby 43 Full Metal Jacket.

Full details on the event are on the website at www.samuiregatta.com