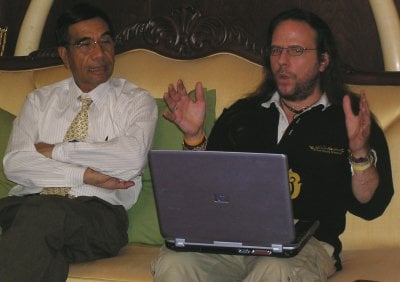 PHUKET: Popular entertainer Todd Thongdee and Phuket Governor Udomsak Uswarangkura met this morning to discuss a festival of world music to be held in Patong from December 26 to 30.

The aim of the event, which will be called Music World, is to bring together musicians from 14 tsunami-affected countries, including Kenya, Tanzania, Malaysia, Indonesia and Somalia, to perform live on Patong Beach.

“So far 10 countries have agreed to take part,” Todd said.

He explained that 7.5 million baht is needed to make the event possible. “So far we have secured 3.5 million in sponsorship from Singha beer, AIS and Mitrpol Sugar,” he said. Today, he came to Phuket to ask officially for 4 million baht from the Phuket Provincial purse.

Gov Udomsak said that he would give his answer by the end of May.

Todd added, “We want the event to take place in Phuket because it is popular – everyone in the world knows Phuket. This performance will be world-class, and we want to mix Thai cultural elements with international music to promote Phuket and Thailand to the world.

“Every night a Thai artist will perform, as well as those from other countries. There will be three stages at Patong Beach, so many people will get the chance to perform on stage, including autistic people and others with disabilities,” he added.

To ensure the younger generation has the chance to experience music from other cultures, Todd said that artists will also perform at schools and university campuses before the main event begins.