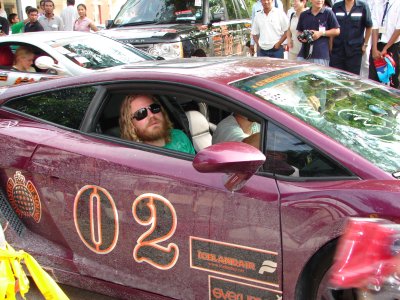 The rally participants, driving everything from ancient Datsuns to a vintage Rolls-Royce to screaming Ferraris, had already raced from London to Belgrade (the Rolls was totaled on the way). The cars were then airlifted in giant Antonov AN124 freighters to Phuket, arriving yesterday.

Having spent a refreshing night at the Amanpuri resort, the stars and celebs leaped into their chariots this morning before scorching off to the north, waving to the smiling officers manning the Tah Chat Chai checkpoint.

In Bangkok, the cars were due to be loaded tonight into the Antonovs again and flown off to the US for the last leg of the race, from Salt Lake Flats to Los Angeles, and the final celebratory party at the mansion of Playboy founder Hugh Heffner.