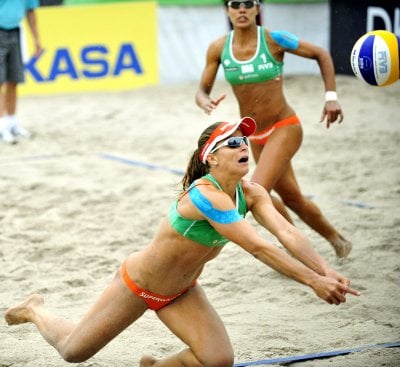 PHUKET: The world’s top female volleyball players have all signed on for this year’s Phuket Open women’s beach volleyball tournament to be held on Karon Beach from November 2 to 7.

More than 100 professional women’s volleyball teams from 33 countries will be participating in this year’s competition, with the top three teams in the world among them, Mr Rowe said.

Some of the countries represented will be Germany, Brazil, USA, Italy, Russia, China and Japan. As host country Thailand will field six teams.

World champions and last year’s winners Jennifer Kessy and April Ross of the US will be back to defend their title, but are expected to face stiff competition from Brazilians Larissa Franca and Juliana Felisberta.

The Brazilian duo, currently ranked number one in the world, have won five tournaments already this year.

Also challenging for the top spot will be fourth-ranked Zhang Xi and Xue Chen of China and the German pair of Sara Goller and Laura Ludwig, who have placed second in three tournaments this year.

“This is a world-class tournament that will be broadcast live on television to over 30 countries around the world. This will be a great chance to let the world know more about Phuket – in terms of having ‘good’ tourism too,” Gov Tri said.

Running alongside the professional competition will be the Federbrau Inter-hotel Challenge, featuring 10 four-person mixed teams representing local hotels, and the PTT Inter-school Cup, with at least five schools participating.

Federbrau has put up 30,000 baht in prizes for this year’s Inter-hotel Challenge taking place from November 5 with finals on November 7 at 2pm at Stadium Court, Karon Beach, event organizer Bob Selznick told the Gazette.

The Inter-school Cup finals will be played on the morning of November 7, with trophies and gift sets provided by PTT.

If any more schools would like to join this year’s competition, please contact Mr Selznick at: bbselz@gmail.com.

There is free admission for all matches, professional and amateur.

The Gazette is once again a proud sponsor of this event and fully supports the growth of beach volleyball in Phuket.