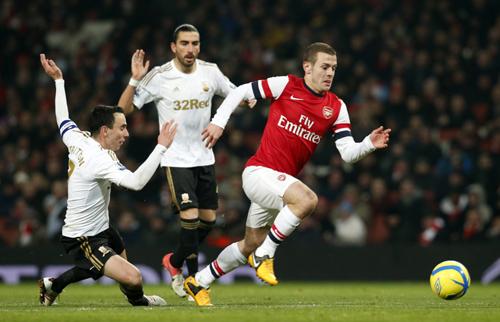 Arsenal wasted a hatful of good chances before sealing the win over Swansea thanks to midfielder Wilshere’s sublime left-foot strike past Michel Vorm four minutes from time following relentless pressure from the home side.

Wayne Rooney’s first goal in over a month after nine minutes proved good enough for 11-times winners United to move into the fourth round but the England striker also missed a late penalty to make the Premier League leaders sweat in the closing stages.

Arsenal, 10-times Cup winners, will travel to Championship (second division) Brighton and Hove Albion in the fourth round on the weekend of January 26-27 and United host Premier League rivals Fulham.

Wilshere, after scoring his first goal for Arsenal since November, said he was delighted with the connection he made with the ball after Olivier Giroud’s superb layoff.

“I don’t think I’ll ever hit another one like that in my life. It was a great set up by Olivier. It’s lucky I was there, we couldn’t put it in,” he told ESPN.

The London club’s strike duo of Theo Walcott and Giroud both had shots blocked on the line as the home team mounted relentless attacks in a one-sided second half and Walcott’s glancing header hit the post with time running out.

However, the 21-year-old Wilshere spared Arsenal’s blushes with the second goal of his comeback season following 17 months out through injury.

“You can say now that Jack is completely back to his best. Credit to the people who prepared him,” Arsenal manager Arsene Wenger said.

Premiership update
Chelsea fans are still struggling to warm to interim manager Rafa Benitez whose side were held to a shock 2-2 league draw by Southampton last night to continue the Spaniard’s uphill battle to convince the club’s supporters that he can be trusted.

Chelsea, who sit six points behind second-placed Manchester City, take on an Arsenal side capable of being both brilliant and blunt this weekend.

Languishing in sixth place and 21 points behind the leaders, Arsenal, who booked their place in the FA Cup fourth round with a last-gasp win over Swansea, need a win to perk up their own challenge for a Champions League spot.

Laurent Koscielny may return to the heart of the Arsenal defence after serving a one-match suspension following his sending-off against Manchester City who entertain Fulham on Saturday.

The champions will be able to call on captain Vincent Kompany who had his own red card from the Arsenal match rescinded by the FA following widespread condemnation of the decision to send him off for a well-timed sliding tackle.

Liverpool can soothe the wounds inflicted by local rivals Manchester United last weekend with victory at home to Norwich City while Newcastle United, who have lost four of their last six league matches, host second-bottom Reading.

Off to a field hospital? Here’s what to pack