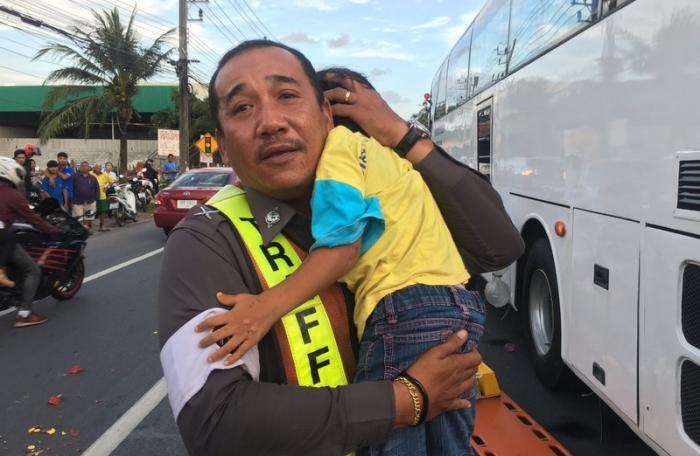 PHUKET: A woman was killed and a three-year-old slightly injured in another hit-and-run accident in Thalang yesterday evening.

The child is now confirmed to be out of danger.

Lt Sunan Pethnhoo of Thalang Police received reports of the accident, which occurred near Tesco Lotus Thalang on Thepkrasattri Road, at about 5:45pm.

Police arrived at the scene with rescue teams to find a Chinese tour bus with a motorbike trapped underneath. A child was sitting by the side of the road.

“Witnesses said that they saw the motorbike riding ahead of the bus, which ‘seemed’ to be speeding. The motorbike driver, Suksai Phukeethip, 38, suddenly switched to the right lane to turn at an intersection about 300 meters ahead,” said Lt Sunan.

“The two vehicles collided, and the motorbike was thrown under the bus and dragged 30 meters by it,” he added.

Rescue teams administered CPR [cardiopulmonary resuscitation] and rushed Ms Suksai to Thalang Hospital, where she was pronounced dead on arrival. She was the aunt of the child riding with her.

As is frequently the practice in Thailand, where tour bus drivers are often freelancers and not well investigated by their employers, this one had fled the scene before the police arrived.

Officers are now checking CCTV footage in their effort to locate him.