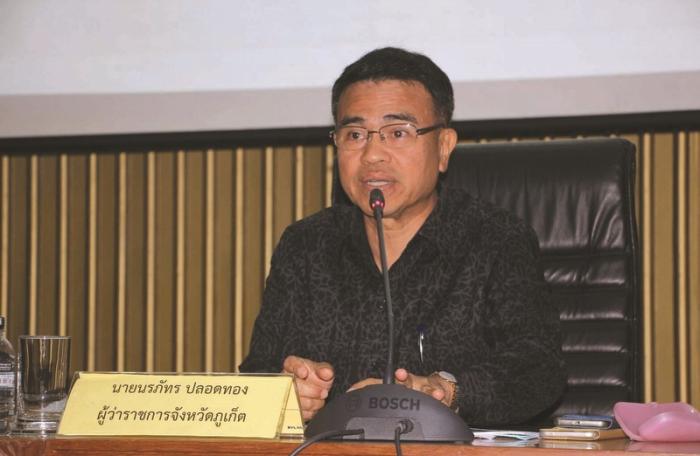 Earlier this week, the governor held his first ‘media meet’ since his arrival on the island on April 10, to lay out his plans for Phuket.

On April 4, ex-Phuket Governor Chokchai Dejamornthan was transferred out after six months on the job, with Gov Norraphat – previously Provincial Management Adviser at the Office of the Permanent Secretary of Interior – being named as his successor (story here).

This project was named by the governor as “Beautiful Phuket by our Hands” or Phuket Suay Duay Mue Rao.

“Cleanliness is the very first impression we present to anyone – we must ensure that Phuket is always clean so that we remain in line with our image as a world class tourist destination,” said Gov Norraphat.

“Cleanliness doesn’t just mean trash collection, but also improving the general image of Phuket as one the cleanest tourist destinations in the world. We will renovate all dirty things that affect our image, such as waterways, fresh markets, public parks, restaurants, stray dogs, and so on.”

The governor added that he wanted cleanliness efforts to be sustainable, rather than a one-off occurrence.

“This is not a one-day project that we pick up trash, pose for the press, and then call it a day. The change should be real and lasting.

“It has to start with you. This cannot work without the involvement of all parties. Everyone has to understand that cleanliness is their responsibility too, rather than just the government’s,” he added.

The governor acknowledged that Phuket has many other problems waiting to be solved, but that cleanliness was the easiest one to start with. The project is expected to begin in next month, with a three-month evaluation also scheduled.

The governor said his second priority is to make Phuket safer, but details about how he plans to put that in motion have not yet been revealed.

The third project is using sports to fight the drug culture so prevalent among youngsters here.

“Local authorities and educational institutions must arrange sports competitions for youth to participate in every month. In 3-6 months, we will arrange a prize-giving ceremony for those with the most participation certificates,” said Gov Norraphat.

The last agenda item at the meeting was “creating religious harmony”.

“Religion is a sensitive subject, so I will try to learn as much as possible about other religions by visiting mosques, churches and so on. I want people to talk openly about their problems, so we can work together and find ways to solve them,” said Gov Norraphat.

“My management style is using the problems as the subject matter or proposition. Then we analyze the root cause of the issue from different angles. Then, we prepare, plan and solve the problem.

“My motto and management style is to make things as simple and straightforward as possible and to analyze the causes of the island’s problems in order to solve them. All these projects are possible if we do things the right way,” said the governor.

Other issues under discussion were infrastructure, traffic, water management, tourism, safety, fraud, natural resources, national parks, and law and order. The governor said details of new projects would be released in subsequent meetings.

“Anyone with any problems or suggestions can let me know directly. I will try to read every case file at the Damrongdharma Center to keep up to date with the public’s issues,” said Gov Norraphat.

“Lastly, if you see anyone using my name to do something illegal, please try to record evidence in any form and let me know. My only purpose in being here is to improve Phuket,” he added.