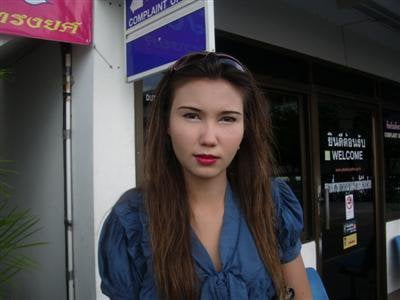 PHUKET: A young woman last week fought off a would-be robber by biting his arm, causing the attacker to flee empty-handed down Soi Yodsane in Phuket.

The incident happened around 4am on June 24 after the victim, Rhian ‘Fon’ Hartman, was leaving her job as a public relations officer at a well-known restaurant in Kathu.

Ms Hartman drove on her motorbike with a friend to Chalong, where they parted ways.

Around 100 meters down Soi Yodsane, where Ms Hartman lives, she was forced to stop by a man on another motorbike.

The man, described as “quite fat”, was wearing a white T-shirt and probably in his late 20s.

Tattoos covered both of his arms.

“I slowed my bike down to cross a speed bump and he passed me, pushing my bike with his foot and stopping right in front of me,” she said.

The man yelled ‘You stop!’ at her.

The man got her in a head lock from behind and grabbed her bag. Ms Hartman instinctively bit his arm, causing him to let go.

She shouted loudly for help and the man fled. Ms Hartman returned home with a slight arm injury.

Around 3pm the same day, she went to Chalong Police Station with her British father, William Hartman, to report the crime.

Ms Hartman said she felt lucky, but was worried others might not be so fortunate if it happened again.

Mr Hartman told the Gazette he would have preferred his daughter to have given over the bag without fighting.

“You don’t know how desperate the guy is. If he’s on drugs he’s very desperate, if he’s hungry he’s not so desperate and just wants to eat,” he said.

“The guy was working alone, which tells me he’s inexperienced – he’s a very young guy and didn’t cover himself,” he said.