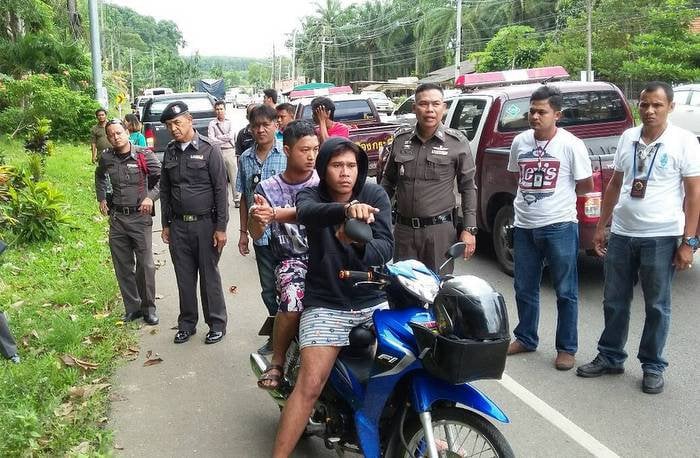 Siriporn Jongrak, 29, was driving home from night work in Ao Nang when she was kicked off her bike, robbed and attacked near Chang See cave in Tai Sai. The two suspects got away with her iPhone and cash, leaving Ms Siriporn to die on the side of the road, confirmed Krabi City Police Superintendent Sompong Thipa-arpakul.

“Ms Siriporn survived the attack by ‘playing dead’. She is now under the care of doctors and has had to receive 250 stitches,” Col Sompong said.

When police investigated the scene they found a mobile phone belonging to Titiporn Pankosee, 23.

“With the mobile phone we were able to locate Mr Titiporn and Sarawut Minsan, 26, along with two knives and the clothing worn during the assault,” Col Sompong said.

“They confessed that they were riding around looking for victims in the Krabi City Municipality area. When they couldn’t find any good targets, they decided to go to Ao Nang and wait in front of the Chinese shrine, which is where the crime occurred,” he explained.

Police would not reveal the name of the hotel that the two men worked for, but stated that Mr Sarawut already had charges of theft in Satun and Trang on his police record.

Both men have been charged for robbery and assault causing serious injury.