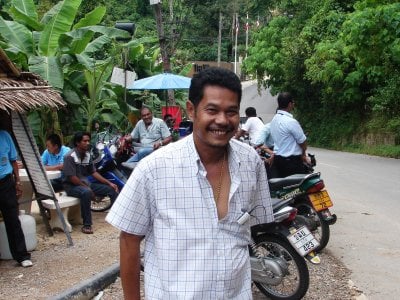 PHUKET: Management at the Westin Siray Bay Resort and Spa, a local affiliate with global resort giant Starwood Hotels, has deferred announcing its decision on whether to allow a local taxi counter inside its new luxury resort on Koh Sireh in Phuket.

The announcement was made at a meeting on Saturday between the resort management team and representatives of local taxi co-operative, Sirae Island Taxi Service.

Management at the resort, told the Gazette yesterday, “No decision has been made. It is still pending. Details will be released next Monday.”

On Friday, about 50 members of the taxi co-op gathered at their taxi stand in the front of the resort, waiting for good news. However, management asked to wait until Saturday for an answer. Now they are being asked to wait another nine days.

At Friday’s meeting were the resort’s management team, three representatives of the taxi co-op, a representative of the Hello Phuket company and Phuket City Police Superintendent Wanchai Ekpornpit, serving as a witness.

Praderm Klomsuwan, chosen by the co-op to run the taxi stand, told the Gazette this was the co-op’s third attempt in two months to set up a counter on resort grounds, just as local tour operator Hello Phuket had already done.

The co-op has 70 drivers offering non-metered fares in vans, sedans and tuk-tuks, but only a small number of guests walk out of the resort in search of transport, said Mr Praderm.

“Some of our drivers get only one fare in three days,” he said.

However, he added that the number of other taxis seen entering the resort to pick up passengers indicated that many more of the resort’s guests wanted to use taxis, but did not use local drivers simply because they did not know about them.

“We wear uniforms. We are polite to guests. We keep records of each trip made in order to be able to track down any lost items. We are never rude. We just want the hotel to share their income with local villagers,” Mr Praderm said.

The resort has a list of set fares, which start at 300 baht for a taxi ride into central Phuket Town, a ride of about 5 kilometers. The cost to hire a van to either Phuket Airport or the Big Buddha image in Karon is 1,000 baht.

The new luxury hotel has 261 rooms, suites and villas. Its unique location essentially cuts it off from inexpensive public transport.

That could change in the near future, however, as the Phuket Provincial Administration Organization (PPAO) is now working to establish a new Pink Bus route to Koh Sireh.