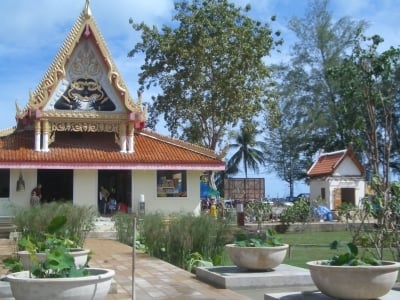 KAMALA: True to their promise, the folks from the popular Australian TV gardening design program Backyard Blitz, have completed their 48-hour makeover of the gardens at Wat Kamala, which were washed away by the tsunami.

The program, which airs on Australian TV Channel 9, specializes in renovating people’s gardens along themed lines, and doing it in record time. This is the first time an episode has been recorded overseas.

Seventeen crew from Backyard Blitz, aided by 60 Thais, started working at 6 am on Tuesday and finished the makeover at 2 am today.

Jacq Brophy, Head of Production, told the Gazette, “We were lucky that there was not much rain here, so we could keep working and finish in the time we expected.

“The hardest part was placing the stone Buddhist symbols in the meditation garden. They were so heavy,” she added.

Niyom Nanudorn, who spent time in Wat Kamala as a monk and is now the abbot’s chauffeur, said he greatly appreciated the nice garden provided by foreigners, especially since they were from a different religion,and yet still thought about the wat.

Kamala-born Jiraporn Apichart said she was astonished by the “beautiful garden” when she went to the wat to make merit this morning.

“A few day ago, I rode past there and saw many people working there with some foreigners. I did not know what they were doing, though I realized it was probably some kind of improvement after the tsunami. It looks very different,” she said.

The program will be aired in Australia at 6:30 pm on September 11.

Ya bah arrests “on the increase’