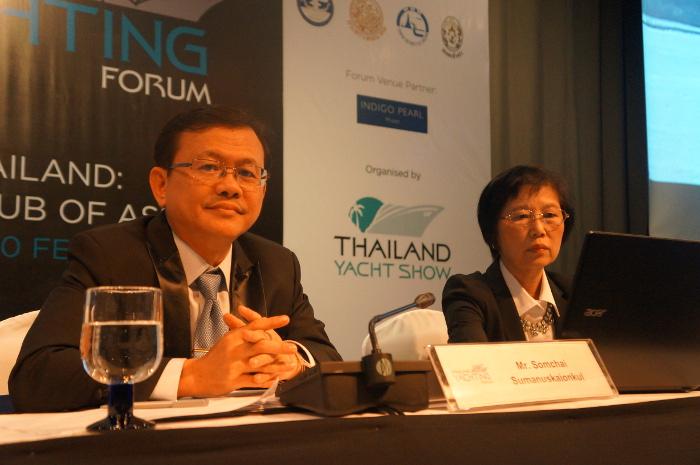 PHUKET: There will be further delays in Thailand rolling out the highly-anticipated foreign-flagged superyacht charter licence, industry representatives were told at at Thailand Yacht Show forum on Wednesday.

Though the regulations and rules with regards to the actual superyacht charter licence were hammered out on August 10, a number of related issues remain as hurdles for superyacht owners, explained Somchai Sumanuskajonkul, a deputy director-general for the Thailand Marine Department.

“The two major remaining issues deal directly with immigration law and value-added tax [VAT],” said Mr Somchai. “The relevant government agencies are working to create one-year-permission-to-stay approvals for superyacht crew members – linking their stays in the country with the ship’s stay. Additionally, progress is being made to create a VAT exception for superyachts.”

The immigration issues are awaiting final approval by the Immigration Bureau commissioner, while the VAT exception needs to be enacted by royal decree, Mr Somchai said.

Lies Sol, the charter manager and broker of Northrop and Johnson, expressed her concern that many yacht owners are already having to make the decision of whether or not to send their boats to Asia for next season.

“Could you give us a timeline when the legal aspects of revenue and crew visas will be decided upon?” asked Ms Sol, also noting that preparations needed to be underway by charter brokers handling bookings for next season.

“Please be assured that we are working very hard to get everything taken care of as quickly as possible,” Mr Somchai said.

The discussion on the status of the superyacht charter licences between government officials and members of the marine industry was facilitated by the Thailand Yacht Show at the Thailand Yachting Forum at the Indigo Pearl (story here).

The Phuket Gazette and PGTV, along with our partner newspaper The Nation, are proud to be the national media partners for the Thailand Yacht Show, Thailand’s largest and most lavish annual marine leisure event.