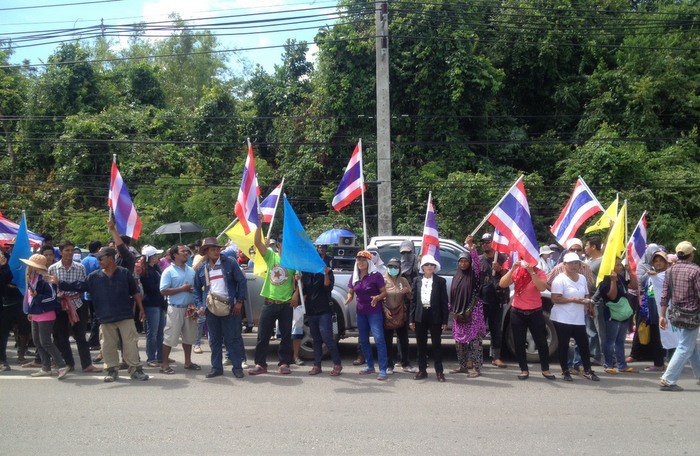 KRABI: Violence broke out at Krabi International Airport yesterday between locals and squatters protesting their removal from a palm oil plantation earlier that day (story here).

Dozens of locals were upset at the protesters, who had moved from the plantation to the airport after being forced off the land by Krabi police and related officials, stating that it gave Krabi a bad image.

It took officers nearly 30 minutes to break up the fight, which saw brawlers using flagpoles waving the Thai flag as weapons.

However, when officers arrived at the plantation they were met by about 60 people creating a blockade.

“We negotiated with them for about an hour, demanding that they leave or we would have to force them out,” said Plai Phraya Police Superintendent Chamnan Chamnankij. “They then fled into the plantation. So we went in and arrested about 100 people.”

After the names and identification numbers of those arrested were recorded, police released them only to find that they had started to gather and protest outside of the airport, culminating in a fight between the protesters and locals.

“We cannot allow them to gather further in this way, as it could lead to serious violence in the future. We have no choice but to enforce the law and remove them,” Krabi Governor Pinij Boonlert explained in a letter. “We have no intention of harming the protesters. However, it is not their land, so they must leave.”

The squatters took over the plot in July 2013 after it was evacuated by Univanich Palm Oil when its concession license expired. The group demanded that the government allocate the land to the poor under a 2003 Cabinet resolution and that 15 rai of land per person be allocated by the Ministry of Natural Resources and Environment.

However, Col Chamnan noted that only part of the concession licence has expired and that some of the land still has a valid licence until 2023.