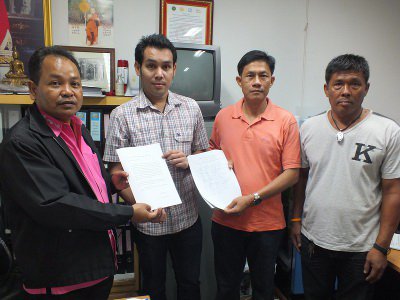 PHUKET: Villagers in Baan Tha Rua in Srisoonthorn, just north of Phuket’s famed Heroines’ Monument, yesterday filed a group complaint against one entertainment venue in the area for noise pollution and closing after the regulated trading hours.

The complaint was addressed to Phuket Governor Tri Augkaradacha.

“A new pub opened in Srisoonthorn about eight months ago. It is located in a residential area about 150 meters north of the Heroines’ Monument. Since it opened, there has been a lot of noise pollution and the people who go there double-park their cars and block the street,” Mr Chalermpol said.

“It is disturbing people’s lives. The pub is open until 5am every night. People who live in the area have to sleep at their friends’ and relatives’ houses because they can’t stand the loud noise while they are trying to sleep.

“And the whole area around [the pub] smells like urine, because people who go there urinate along the street,” he said.

Mr Chalermpol explained that a complaint had already been filed with Srisoonthorn Municipality.

“I came here to file the same complaint to Phuket Governor Tri Augkaradacha because we would like him to check on the pub. We want this problem solved as soon as possible,” he said.

Damrongtham Center Chief Prapan said he would forward the complaint to the Thalang District Office.

“They will send someone to inspect the bar. We will inform Governor Tri of the results of the inspection,” Mr Prapan said.