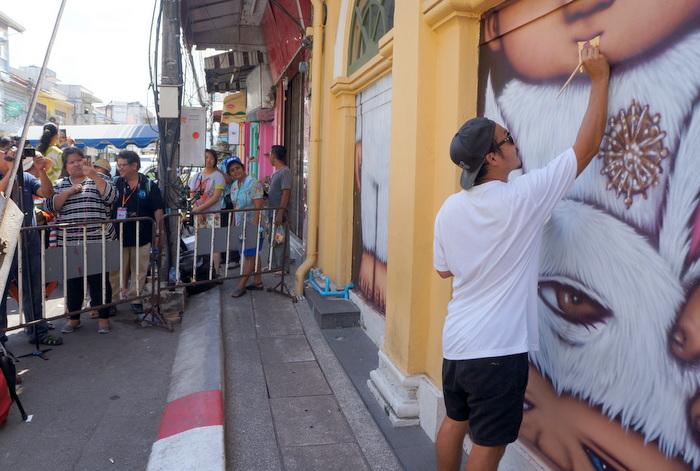 PHUKET: Less than a month after the unveiling of a mural painted on the wall of the historic Peranakan Nitat (Baba) Museum in Phuket Town, the artist Alex Face today began painting over his own work.

The artist, whose real name is Patcharapol Tangruen, was commissioned by Phuket City Municipality to paint the mural, which was unveiled on April 10. However, he agreed to remove the depiction of a three-eyed child following public outcry (story here).

Armed with a very small brush, Alex began painting over a few centimeters at a time, pausing frequently to take photographs that will become a stop-motion movie.

He told the Phuket Gazette he has no idea how long it will take to fully remove the artwork.

“I did not set a deadline. All I know is that it is likely to take longer than the time it took me to create it,” he said.

The original mural took about five hours to paint, he said.

“I am just fine removing it. I’m excited to see so many people showing up today.”

“If I am commissioned to paint in another area, I do not think I will repaint the same picture. Each place has a different context, and this particular composition may not be suitable for another area,” he said.

“I am thankful for all the support I have received from the community. And once again, I am fine with the decision to remove my artwork. It’s natural for street art to be removed or replaced – either by rain, sunshine or other people’s art.”