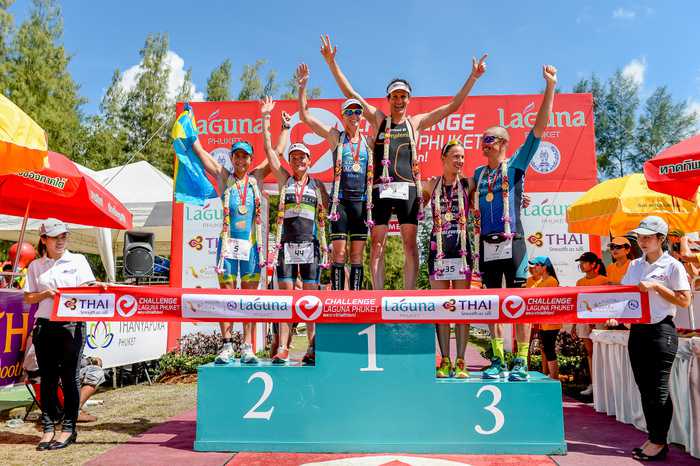 The win follows his debut title win at the 2012 Laguna Phuket Triathlon, which he successfully defended the next year.

World champion Melissa Hauschildt of Australia defended her title in the women’s field with a time of 4:27:40, leading her nearest rivals by more than 10 minutes. 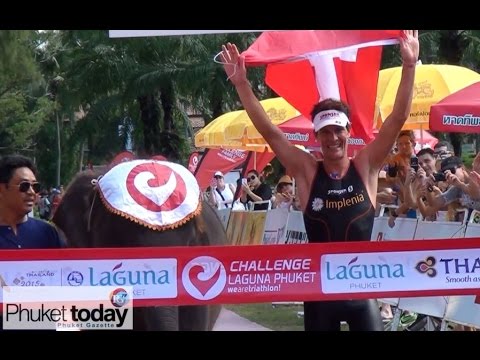 Athletes from 40 countries jumped into the waters of Bang Tao Bay at 6:30am to tackle the 1.9km swim, followed by a 90km bike ride and a 21km run. Video: PGTV

Hauschildt emerged second from the swim (24m:28s) behind Radka Vodickova of the Czech Republic, but then rode off with the lead on the bike (2:29:31) and carried through with a strong run (1:27:06) to win. Hauschildt finished almost 15 minutes before Parys Edwards of Great Britain (4:42:05), last week’s Laguna Phuket Triathlon champion in the women’s field.

Among the greats racing yesterday were 2013 Challenge Laguna Phuket champion Rasmus Patraeus of Denmark; Laguna Phuket Triathlon’s four-time champion Massimo Cigana of Italy; and multiple records holder and runner-up in the 2013 world championships Luke McKenzie of the US.

Joining them were Alberto Casadei of Italy, who was recently-crowned 2014 Laguna Phuket Triathlon champion in a tie with Cigana; Till Schramm of Germany; and world-renowned triathlon sweetheart Belinda Granger of Australia.

Wild aims to come back for his fourth win next year.

“I always like to come back here because it means a lot to me. It’s one of those races that you want to come to, and not one of the races that I feel like I have to do,” he said.

“Although it’s really hot and humid out, making the race really tough, the surrounding was nice and the hospitality is good here – so I’m happy!”

A field of about 550 individual pro and age group athletes representing 40 nationalities jumped into the waters of Bang Tao Bay at 6:30am to tackle the 1.9km swim, followed by a 90km bike ride and a 21km run.

The first Thai male finisher was Phuket’s own Jaray Jearanai who finished 18th overall with a time of 4:37:04, breaking his record from last year of 4:41:31.

The Laguna Phuket Triathlon and the Challenge Laguna Phuket are proudly sponsored by the Phuket Gazette and PGTV’s “Phuket Today” show, the island’s only nationally broadcast television program (aired six daily on True Visions and all local cable networks).