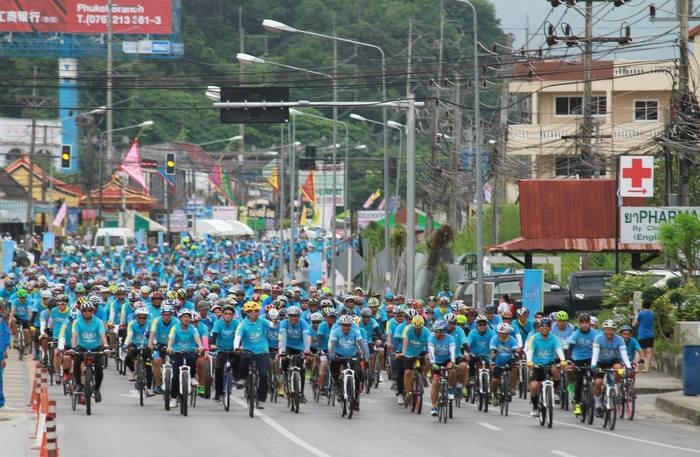 PHUKET: People on Phuket, and throughout Thailand, smashed the Guinness World Record for most cyclists riding at the same time yesterday with the ‘Bike for Mom’ event honoring HM Queen Sirikit’s 83rd birthday.

The event set the record with 146,000 ‘eligible’ cyclists riding at the same time, which more than doubled the previous record set by Taiwan.

The recorded-breaking event was held by order of HRH Crown Prince Maha Vajiralongkorn, who wished to express his gratitude and loyalty to Queen Sirikit on the special occasion.

“Thousands of people have come together in Phuket, and throughout the country, on this very special occasion. This shows the harmony of the Thai people,” Governor Nisit said. “Initially, Phuket had about 3,300 people registered, but on the day of the event, more than 1,000 people registered, giving us a total of 4,500 participants. However, I believe that there were a lot more people who joined without registering.”

Gov Nisit encouraged local governments to keep up the cycling trend in Phuket.

“Cycling events should be held on the island continuously. It is good for health and promotes cycling tourism on Phuket. Above all, it supports the wish of The Crown Prince to promote the health of the Thai people,” said Gov Nisit.

The Governor is already planning a cycling event to take place from Sarasin Bridge to Patong or the Kata-Karon area.

There were almost 295,000 advanced registrations for the national ‘Bike For Mom’ event, consisting of 40,000 in Bangkok and 254,863 in other provinces, reported The Nation. However, the actual number of participants nationwide was higher, estimated at between 300,000 and 400,000.

The Crown Prince presided over the opening ceremony for the event at the Royal Plaza in Bangkok.

After blaring the horn to start the event, he and his daughter, HRH Princess Bajrakitiyabha, led the procession to the 11th Infantry Regiment in Bang Khen and returned to the starting point to complete the 43-kilometer route.

Other provinces held the event with varying routes and participants from all walks of life to express their loyalty to Queen Sirikit and the Royal Family.