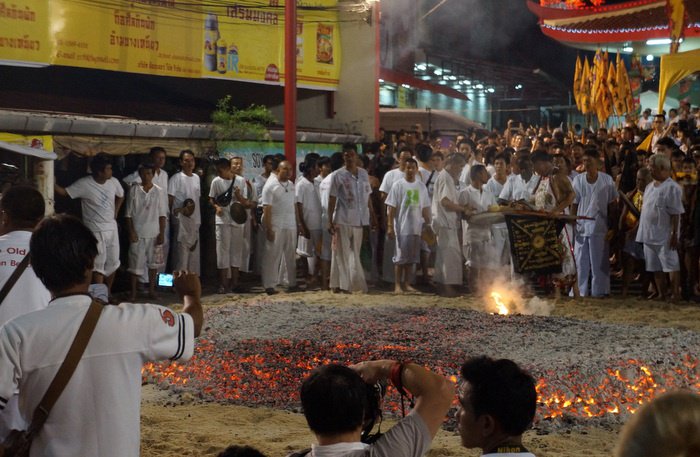 PHUKET: Governor Nisit Jansomwong has announced the dates for this year’s Vegetarian Festival with the new addition of a parade in honor of HM King Bhumibol Adulyadej.

The nine-day festival is slated to take place from October 13 to 21.

Last year, Phuket celebrated two festivals in the same year for the first time in its history (story here).

“According to the Chinese lunar calendar there are two 9th lunar months this year. It happens every 100 years,” explained the president of the Jui Tui Shrine, Teeravut Sritularak, last year.

The Vegetarian Festival, or jia chai in local Hokkien Chinese, began in 1825, when the governor of Thalang, Praya Jerm, moved the island’s principal town from Ta Reua in Thalang district to Get-Hoe in Kathu district, where there were many tin mines and Chinese miners.

Kathu at that time was still covered in jungle and fever was rife. It happened that a traveling opera company (called ngiu in Thai or pua-hee in the Hokkien dialect) came from China to perform for the miners.

When the whole company fell sick from an unnamed malady, they kept a vegetarian fast to honor two of the emperor gods, Kiew Ong Tai Teh and Yok Ong Sone Teh. The sickness afflicting the opera troupe then disappeared.

This greatly interested the people of Kathu, who asked how it was done. The answer was that ritual vegetarianism, with its attendant ceremonies, had been the remedy, and as a result, people embraced the faith enthusiastically.

As the sun sets on the first night, all Chinese shrines taking part in the annual Vegetarian Festival will raise their go-teng poles so that the jade emperor, among the nine emperor gods, can descend from the heavens heralding the beginning of this year’s event.

Meanwhile, cooks at food stalls around all participating shrines will begin preparing vegetarian fare which will be provided throughout the festival.

The nine-day event attracts thousands of visitors to Phuket to witness the festivities, which include fire-walking, bladed-ladder climbing, hundreds of stalls fully stocked with vegan foods and processions at locations throughout the island.

Further details on parades and celebrations will be made available as the event draws near.