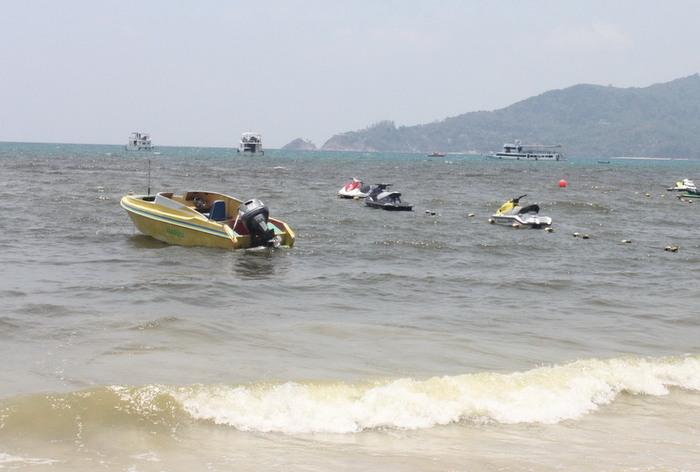 PHUKET: Patong operators are concerned that untreated wastewater is seeping into the bay after a one- kilometer swath of beachfront water turned brown yesterday.

“At this stage, we need to take water samples and conduct some basic tests. However, it is very likely to be the same phenomena as last month – a plankton bloom (story here),” said Suphasit Boonpeinphol of the Phuket Marine Biological Center (PMBC).

Plankton blooms are often caused by excessive amounts of nutrients, in the form of nitrogen and phosphorus, spurred on by days of bright sunshine. In the past, algae blooms in Patong Bay have been directly linked to untreated wastewater pouring into the popular tourist area via the Pakbang Canal at the southern end of the island (story here and here).

The brown water now stretches from Pakbang Canal all the to about the Patong Police box at the end of Soi Bangla.

“I think the brown water isn’t just because of the plankton bloom. I believe that untreated wastewater is a factor,” said a jet-ski operator who declined to be named. “With the water like this, tourists are afraid to enter the bay, which could be devastating for our businesses.”

The jet-ski operator also expressed his concerns about what damage the water could be doing to the marine life in the bay.

“The operators have very valid points and concerns. We are doing our best to determine whether or not the bloom has been caused from untreated wastewater being discharged into the bay,” Mr Suphasit said. “It just takes time to conduct the tests.”