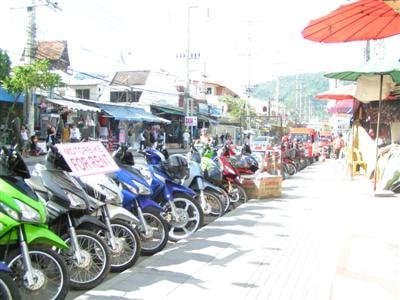 PATONG (TNA, Gazette): The poorly-regulated “motorbike for hire” industry in Patong has contributed to an alarming number of motorcycle accidents in Kathu district, where more than half of the 500 accidents reported to Kathu Police involved unlicensed foreign motorcyclists, the government’s Thai News Agency (TNA) has reported.

With many motorcycle rental shops in Patong, foreign tourists and expats can easily rent a motorcycle without having a license, as this is not strictly monitored by the authorities, TNA reported.

For many tourists, renting a motorbike in Patong is an attractive option as a single ride in a tuk-tuk in the resort town, which charges the most expensive tuk tuk fares in the country, will cost about the same or less as the rental of a motorbike for a 24-hour period – about 150 baht.

Local residents have also expressed their concern about some foreign motorcyclists whose reckless riding has tarnished the image of one of the world’s top tourist destinations. Some foreigners simply do not even know Thai traffic rules. Many like to ride fast, frightening local people and other foreign tourists seeking a peaceful holiday, the TNA report read.

“They always ride fast and crosscut other cars. I’m so scared I will crash one day,” one local resident was quoted as saying.

However, the Land Transportation Department on Phuket insists tourists and expatriates can ride motorcycles in Thailand only when they have been issued a motorcycle license by the department.

Motorbike licenses are obtained by submitting identification documents and a work permit or an address guaranteed by the Thai Immigration Office, then passing written and practical tests. The process can be done in a day.

There was no mention in the TNA report of any impending crackdown of the many outfits who rent motorcycles to foreigners without a license.

In most cases, all the renters need to do is hand over their passport as a form of surety.

Motorbike rental is also popular among some Thai criminals, who use the vehicles when carrying out crimes such as “snatch and runs” thefts.

Norwegian passes away in Rawai