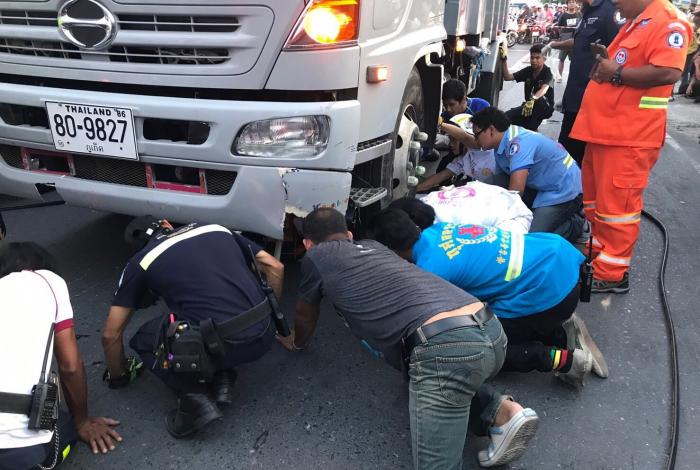 PHUKET: Two university students were killed in a horrifying crash when a garbage truck ran over them in Chalong on Monday.

Lt Chanat Hongsittichaikul of Chalong Police and rescue workers arrived at the scene at about 6pm.

“Prince of Songkla University (PSU) studenta Passatorn Chaicharoensun, 20, from Hat Yai, and Panicha Mingkanitkul, 19, from Trang, were heading toward town on Chaofah East Rd on a motorbike when a garbage truck, driven by 35-year-old Sumon Pimchangmai, smashed into them,” said Lt Chanat.

Ms Panicha was first run over, followed by Mr Passatorn, who was thrown off the bike and crushed under the front wheels of the truck.Rescue workers had to lift the truck from the front to recover Mr Passtorn’s body.

“Mr Sumon told us that he did not see the motorbike at the time of impact. However, we will investigate further due to the fact that the CCTV footage doesn’t show who caused the crash,” he added.

Police tests for alcohol and drugs came out negative for Mr Sumon.

Videos and pictures of the incident were soon uploaded and shared on social media, following which users noticed a man with a red bag picking up a cell phone from near one of the students’ bodies and walking off.

Enraged netizens immediately demanded that the man be found and arrested.

However, PSU’s Facebook page posted yesterday morning noted that the man had just arrived at the university to return the phone and explain what had actually happened.

“Suchat Petsri, 43, is a private company security guard and he told us that he only picked up the phone to avoid it getting run over by passing cars,” the university’s post read.

Phuket Gazette reporters called Mr Suchat to ask him directly what had happened that day.

“As soon as I picked up the phone, I saw that the truck driver was about to escape, so I ran to stop him. I kept him about 300 meters from the crowd that had gathered there, until the police arrived,” he said.

Mr Suchat explained that he helped clear the road and then went home.

“I remembered that I had the phone when I got home, but it was too late in the night to return it. I was planning on taking it to PSU the next day – I did not intend to keep it for myself and I would like to apologize to everyone for any confusion I caused,” he added.