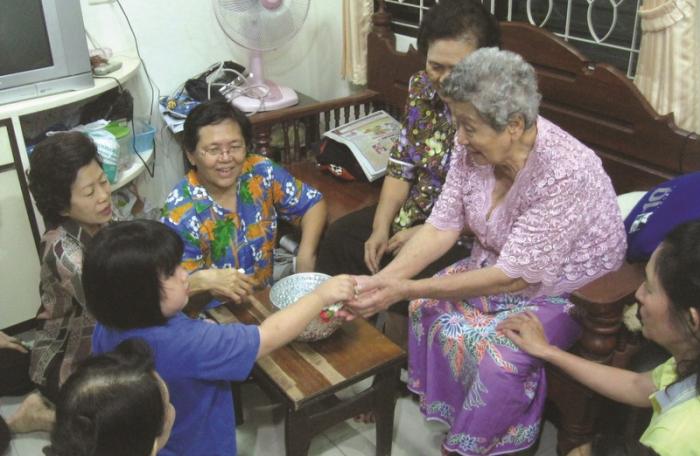 PHUKET has its own riotous version of Songkran, Thailand’s most important public holiday. Primarily a water festival, it celebrates the Thai lunar New Year and is held annually on April 13.

Mostly an occasion for youthful exuberance, the whole island is turned into a war zone, as young people spend the day getting into water fights with anything from pump action water pistols to garden hoses and buckets. The battle is waged both on foot at roadside and from pickups loaded with tanks of H2O.

If you are foolhardy enough to join the celebrations, you may also be covered in a mix of water and white talc or chalk, a tradition begun by monks as a way of marking blessings. This use of powder seems to come from the Indian festival of Holi, which, like the Christian Easter, is celebrated at the same time.

Mind you, Songkran does have a serious side, as Thai festivals usually do. It is an occasion – much like the local vegetarian festival or Loy Krathong – for merit-making and purification. For devotees, the morning will begin with a visit to their local temple, to wash images and statues of Buddha, or to clean and redecorate their house shrines. All these gestures are intended to initiate purification of the self and washing away of personal sins and bad luck in the past year.

The young may pour water over the palms of the elderly as a sign of reverence to one’s ancestors. Other forms of merit-making may include the usual offering of food to monks or, less commonly, the release of wild creatures such as birds or fish. In the south, people aim to observe three rules of conduct for the day: don’t work, don’t spend money and don’t tell lies.

In Sanskrit, the word ‘Songkran’ means ‘the passage of the sun from one sign of the zodiac to another’. There are 12 passages each year, but this one, celebrating both the Thai New Year and the ‘Vernal Equinox’ in western culture, is the most important. Originally determined by astrological computation, it is now observed on a fixed date. Sankranti is also the name of a Hindu harvest festival celebrated in India to mark the arrival of spring. In Thailand it marks the conclusion of the dry season.

A few words of advice for newcomers. If you do venture out, be prepared for anything from a snow-covered wind-screen to ice cold water down your back. Wear old clothes and if you are driving, be prepared for grid-lock, especially in parts of Phuket Town.

Also, look out for drunken revelers; they can be a danger both to themselves and others. Otherwise, embrace the occasion and enjoy being a kid again.

Law, Life & Society: Have fun, but don’t break the law